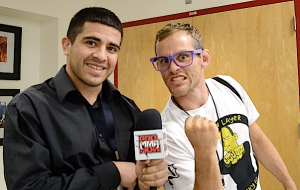 Glover, who after 15 minutes ultimately lost via armbar to Terra, discussed his playful style and strategy during the match, as well as his preference for Metamoris’ submission-only rules.

Glover actually holds a win over Caio in points competition and talked about the possibility of having a tie-breaker match, but insisted they will need to be paid well for their services. Glover also promised to return to Metamoris in the future and is ready to take on all-comers.

That wraps up our Metamoris coverage for 2012 guys. Can’t wait until the next one. To learn more about Metamoris visit www.Metamoris.com or follow them on Twitter at @MetamorisPro. Subscribe or befriend Jeff Glover on Facebook at Facebook.com/jeff.glover.969.

And if you have not seen it, check out Jeff Glover vs. Caio Terra and the rest of the Metamoris matches here: The Metamoris videos.