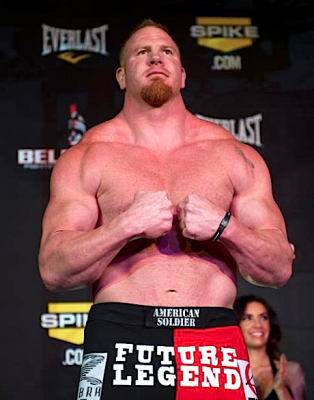 The only difference being, last time the fight was ruled a “No Contest” and this time Prindle was disqualified and it is counted as a loss on his record. And as for Santos, well, if he is able, he moves on to the semifinal round of Bellator’s season seven heavyweight tournament.

Prindle spoke with ProMMAnow.com (www.prommanow.com) this week about the incident and what exactly happened. He gave us an update on Santos’ condition, shared his thoughts on the disqualification and where he goes from here.

PRO MMA NOW: Hi Eric, thanks for speaking with us at ProMMAnow.com (www.prommanow.com). You’re coming off a rematch with Thiago Santos at Bellator 75 last weekend in which you were disqualified after landing an accidental groin shot with an axe kick that apparently injured Thiago enough so that he was unable to continue. Have you heard any update on Santos since the fight on the severity of the injury?

ERIC PRINDLE: First I just want to apologize to the fans, Bellator and Thiago Santos for the accidental groin shot! I heard from a fight doctor that Santos’ pubic bone was fractured. The doc said it’s below the belly button and higher than the groin.

PRO MMA NOW: That’s the first fight I’ve ever seen a guy carried out on a stretcher due to a groin shot. What was going through your mind as soon as you landed that axe kick and saw he was injured?

ERIC PRINDLE: First thing that went threw my mind was, “Oh sh*t!” Then I felt so bad for him I know the pain that he was feeling and just hope he didn’t have a long recovery like I did!

PRO MMA NOW: What makes this even more crazy is the fight was a rematch from November 2011 at Bellator 59 where the bout was stopped in the first round because he landed a groin shot on you. Let me ask, did you just misjudge the distance on the axe kick?

ERIC PRINDLE: Yes I did misjudge the kick. I was over him and I was worried about the leg kick to my knees. So I was standing just out of range. I came in and tried to axe kick his solar plexus, but made a misjudgment and came up short… I’m not a person that would ever do that on purpose. Life is way too short to be an angry or hurtful person.

PRO MMA NOW: Being that you went through basically the same thing, does it make it easier to sympathize for him being unable to continue, or did you feel he should have been able to carry on with the fight?

ERIC PRINDLE: I wasn’t thinking about that I was worried that he was okay! When I got kicked to the groin I tried to continue but I’m glad the ref did his job and stopped the fight and called it a NO CONTEST!

PRO MMA NOW: Now a major difference in this fight and your first fight with Santos, is that the first fight, as you just said, was ruled a No Contest and this most recent fight was ruled a disqualification and the loss goes on your record. How disappointing is that and why was there a difference in the rulings — is it just because the fights were in different states where the athletic commissions have different rules on that particular matter?

ERIC PRINDLE: It is really disappointing more than I can articulate to you! I’m not sure why they ruled it in different ways! And to me the first fight kick looked intentional due to the soccer kick to the groin. But I’m not a ref or the commission.

PRO MMA NOW: The bout was of course the quarterfinal round of the Season 7 Heavyweight Tournament. What happens next — where do you go from here? Will you continue on with Bellator?

ERIC PRINDLE: I want to fight for Bellator right away. I’m in good shape and no new injures. I just want to fight as soon as possible.

PRO MMA NOW: Did you talk to Bjorn Rebney after the fight and if so, what were his thoughts on the whole thing?

ERIC PRINDLE: I can’t say what Bjorn was thinking! But I understand he had every right with the whole situation if he was upset.

PRO MMA NOW: I wanted to ask you about this. Bellator’s heavyweight champion Cole Konrad retired. The guy fought once last year and once in 2012. Apparently he needed to make some money and pay his bills. Can you understand his decision considering they were not keeping him very busy and is that something you have had to deal with as well or do you work another job in addition to fighting?

ERIC PRINDLE: I don’t want to say anything about Cole and his retirement. He is young and a great champion and I think will be back, but I’m a combat vet from the army. But I’m going to have to do something to help support my loving family.

PRO MMA NOW: So the guys left in the season 7 heavyweight tournament are Vinicious Queiroz and Alexander Volkov, and Richard Hale and Thiago Santos. Which one do you think will win the tournament?

ERIC PRINDLE: In my opinion all the guys in the Bellator heavyweight tournament are dangerous and any one of them can win it! It just is one punch or submission away for each of them.

PRO MMA NOW: Where are you training now that Team DeathClutch has shut down — I know Pat Barry said he’s had some trouble finding big guys to work with — are you having that same trouble?

ERIC PRINDLE: I’m training with CSW Training Center in Fullerton, Calif. There are some great heavyweights there — Josh Barnett, Josh Burns, Jack May. And other heavyweights come and train at CSW [which is] Erik Paulson’s gym. And I’m going to go train with all the best fighters I can!

PRO MMA NOW: Eric, thanks for taking the time to talk with us. I’m sorry this happened to you (and to Santos!) and hope to see you back in there soon. Is there anyone you would like to shout out or thank?

ERIC PRINDLE: Thank you! I would like it if people that support me would let the promotion know how they feel… And thank you to Bellator, my fans and [Thiago] Santos’ fans, my wife and kids, Coach Erik Paulson, all my training partners… CSW, Fight Ready Gym, Busted Knuckle boxing gym. Thank you to the Patino Diet for making the weight cut not too horrible and for dropping my body fat in half. My sponsors Subway, Intimidation, Ammo-to-Go, Iron Fist, Born to Bleed, American Muscle, OCfightdocs.com, vii-ad.com. Thank you and God bless.