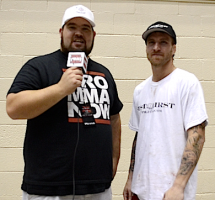 The win earns Reynolds a lightweight title shot against “Notorious” Nick Newell (8-0) in December at XFC 21 in Nashville. ProMMAnow.com’s Gary Thomas caught up with Reynolds after the fight to get his thoughts on his performance and how it feels knowing he already has that title fight lined up for XFC 21.

Reynolds said he was surprised Borgomeo shot in when he did because he normally doesn’t do that and let it be known he is the wrong guy to be practicing your shots on. Reynolds said he loves fighting in Tennessee, the fans there really appreciate it and he looks forward to winning the XFC 155-pound title in front of The Volunteer State crowd.