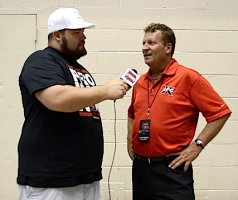 KNOXVILLE, Tenn. — XFC President John Prisco spoke with ProMMAnow.com’s Gary Thomas following “XFC 20: High Octane” this past Friday night at the Knoxville Civic Auditorium. Prisco shared his thoughts on the event, including Nate “The Train” Landwehr’s second round TKO win over Chris Wright. Prisco was so impressed with Landwehr’s performance he immediately signed him to a multi-fight contract with Xtreme Fighting Championships.

Prisco also talked about Scott “Hot Sauce” Holtzman, who scored a first round TKO win over Bellator veteran Chris Coggins to pick up his third straight professional victory (2 TKOs/1 submission). “Scott is going to be a world champion one day. I just feel it with that kid. That kid is the most talented kid I’ve ever seen at this stage in his career.”

Prisco talked about main event winner Eric “It’s a Wrap” Reynolds, who defeated Blackzilian fighter Lorenzo Borgomeo via second round submission. “Lorenzo Borgomeo is a very good fighter and Eric just continues to find ways to win,” said Prisco. It was Reynolds third straight main event victory in the XFC and he will go on to fight “Notorious” Nick Newell for the XFC lightweight title at XFC 21 in Nashville in December.

Also on the XFC 20 card was a women’s MMA featured bout between Sofia Bagherdai and Sarah Maloy. Despite a strong start by Maloy, Bagherdai kept her composure and rallied with a first round TKO stoppage. Prisco said, “Sofia is one of those fighters that when I saw her fight, I immediately said I’ve got to sign this girl. She’s a very tough girl, very personable, very talented and we’re very blessed to have her in our organization.”

In closing, and with one more show to go, Prisco talked about the year that has been 2012 for the XFC and where he sees the organization headed in 2013 and beyond. “We’re very happy with our position in the industry right now and big things are going to happen for us,” Prisco said. “AXStv has been great for us. We hope to continue to stay on AXStv, but don’t be surprised to see us on other networks as well. There’s a future for the XFC in this industry, there’s no doubt about it.”

Fight fans can follow John Prisco on Twitter at @JohnXFC. Also, check out all our post-fight video interviews with the fighters and the complete fight results from “XFC 20: High Octane”.

That wraps up our XFC 20 post-fight coverage guys. We’ll see ya at the next one.