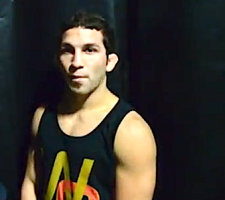 Alp Ozkilic (5-1) was scheduled to fight on Friday, Sept. 21, at Titan FC 25 at the Dwight Davis Tennis Center at Forest Park in St. Louis, however, the event which was scheduled to take place outdoors and air live on AXS TV, has been postponed due to inclement weather.

Prior to the show’s cancellation ProMMAnow.com (www.prommanow.com) reporter Daniel Theodore caught up with Alp to discuss the fight, his time spent on The Ultimate Fighter working as a wrestling coach alongside Dominic Cruz, and his training at St. Charles MMA in Missouri.

Titan FC promoter Joe Kelly says they will try and reschedule the event as soon as possible and try to keep the fights together. Alp was scheduled to face Ray Grindstaff in a 135 pound match-up.