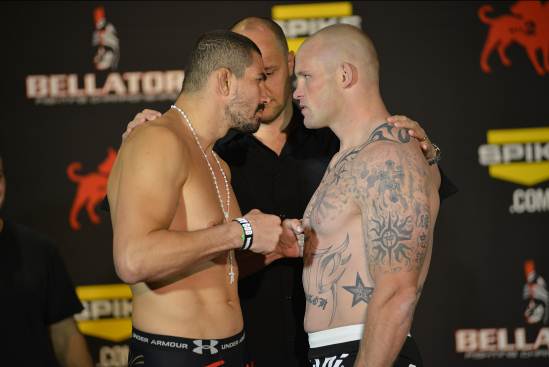 TUNICA, Miss. — Bellator Fighting Championships’ 2012 Summer Series comes to a close with Bellator 73 takeing place this evening at Harrah’s Tunica and features the Light Heavyweight Tournament Finals featuring Travis Wiuff vs. Attila Vegh, as well as the Bantamweight Tournament Finals with Luis Nogueira vs. Marvos Galvao. The event will broadcast LIVE on at 8 p.m. ET/7 p.m. CT on MTV2 and in commercial-free HD on EPIX. The prelims begin at 6 p.m. ET/ 5 p.m. CT and streamed LIVE and FREE on Spike.com. ProMMAnow.com (www.prommanow.com) will provide LIVE results and play-by-play commentary for tonight’s event.

Round 1 – Left hook and big leg kick from Galvao but Nogueira gets right up, clinched against the cage. Knee to the thigh of Nogueira. Again. Knee to the body. Galvao tries to drag him to the ground, no dice as Nogueira defends. Clinch war right now as they turn each other around, back and forth. Exchanging body shots and knees. Nogueira backs out with some big punches and Galvao throws back. Galvao claims groin shot and a brief time is called. Left jab from Galvao. Inside leg kick from Nogueira, he takes one on the outside in return. Nogueira with a lot of footwork. They are slugging it out with heavy punches, body lock from Nogueira as he puts Galvao down but he bounces right to his feet. Exchange of inside leg kicks. Nogueira on the balls of his feet bouncing around as Galvao waits for him. Big heavy punches are exchange, Galvao throws a knee toward the head as Nogueira ducks low. They throw a few more punches. Close round. I have no idea how to score that one. Both guys landed great shots. Round 2 – Nogueira with big punches as Galvao counters with knees and punches. Thai plum and a couple knees to the body from Galvao. Big leg kick. He blocks as Nogueira throws a couple punches. Two left counters from Galvao. Galvao trying to counter so far this round. Huge leg kick from Nogueira. Counter knee to the body from Galvao followed by a left hand. Left hook, leg kick from Galvao. he checks a leg kick. Right from Nogueira, leg kick. Huge right hand from Galvao that rocks Nogueira. He tries to fight back but eats another one. Galvao puts him down and gets full mount. Hammerfists from Galvao, Nogueira gives up his back and Galvao blasts him with elbows to the head. The 12-to-6 elbow is legal in Miss. and blasts Nogueira with it until the ref stops it. OFFICIAL RESULT: Marcos Galvao def. Luis Nogueira by TKO (elbows) Rd 2 (4:20) Galvao will go on to face former training partner Eduardo Dantas for the Bellator bantamweight title.

Round 1 – Wiuff pressing. Vegh throws a left uppercut followed by a right hand that catches Wiuff behind the ear and Wiuff goes straight down to the ground. Vegh finishes him off with several more shots and Wiuff doesn’t even know what happened. Twenty-five seconds flat. OFFICIAL RESULT: Attila Vegh def. Travis Wiuff by knockout (punches) Rd 1 (:25) Vegh wins $100,000 and the light heavyweight tournament! He will go on to face champion Christian M’Pumbu for the title. Watch the event replay below: