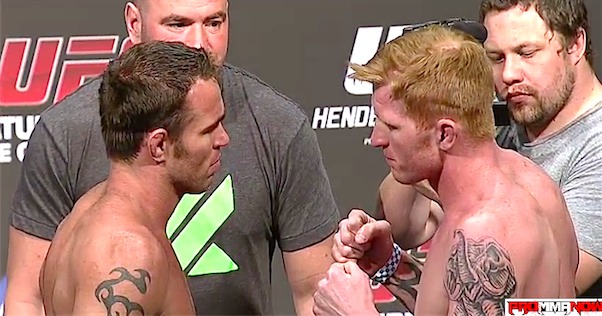 It wasn’t pretty, but it was effective. Jake Shields used his smothering style to move his UFC win streak to two, earning a unanimous decision victory over Ed Herman with scores of 29-28, 30-27, and 30-27.

Ed Herman came out putting the pressure on Shields, coming forward with combinations before clinching against the cage. Shields looked to take control from there, locking up the neck of Herman before taking the fight to the mat. Shields took the back of Herman but couldn’t capitalize on the dominant position as his opponent scrambled back to his feet. Herman then put Shields on the cage, scoring with short left hands to the body as both men fought for position. Neither fighter managed to take control in the final two minutes of the round as they fought a grueling battle in the clinch to the bell.

Herman came out in the second and again went to the clinch. From there Shields was able to get an early takedown, moving to side control easily within a few moments. A kimura attempt followed, but Herman was able to fend off the submission. Herman was unable to get off of his back as Shields kept grinding from the top with elbows and short right hands to finish off the second round as boos cascaded from the crowd.

Shields went to his kicks to start the third, as Herman threw winging right hands. A takedown attempt by Shields was stuffed, which resulted in the fighters clinching again on the cage. After breaking, Herman looked to put his jab to work, then scored a takedown of his own in the center of the cage. Shields quickly made his way back to his feet, then stung Herman with a left hand before securing another takedown with just under three minutes to go. Shields moved to full mount but failed to mount any sustainable offense from there. Herman managed to retain guard but ended the fight on his back as boos continued to erupt from the crowd.

After the judges made their final calculations, it was Jake Shields that would be awarded the unanimous decision with scores of 29-28, 30-27, and 30-27. Shields improves to 28-6 (3-2 UFC) with the victory, as Herman falls to 20-9, snapping a three-fight win streak in the UFC.