XFC 19: Lawson McClure faces Keith Richardson to decide who is No.1 in South Carolina 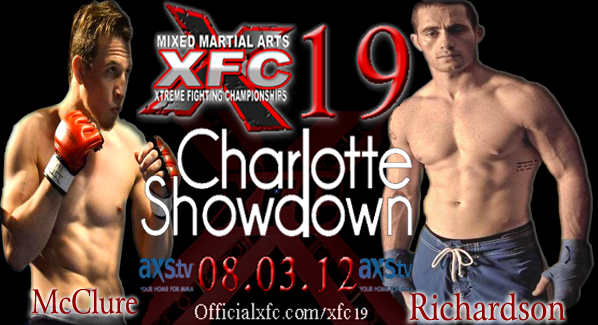 Two of Carolina’s top prospects have been slated to fight at XFC 19 as Lawson McClure takes on Keith Richardson in a featherweight battle for South Carolina bragging rights. The event takes place at the Grady Cole Center in Charlotte, N.C. on Aug. 3.

XFC 19 will feature a headline bout between Corey Hill and Mike Bronzoulis who will meet in an exciting welterweight matchup. The night’s main card action will air LIVE on AXS TV.

Lawson McClure is currently riding a four fight winning streak, most recently defeating Ran Weathers for a second time via unanimous decision at WBFN 45. This was in addition to his previous win over Weathers in July 2010.

Lawson also picked up TKO victories over Jon Queiroz and Aguilano Brandao during 2011, cementing his reputation as a well rounded veteran of the regional circuit.

Keith Richardson last fought at WBFN 44 in March, where he lost via first round submission to Ronnie Rogers. Prior to that he had built up a three fight winning streak defeating Marc Corum via unanimous decision, then Robert Owens and Dustin Walden via submission.

Richardson’s high-paced fighting style and dangerous ground game are both components that make the upcoming fight against McClure one to watch out for.

The event kicks off at 8 p.m. ET, and goes live on national television at 10 p.m. ET on AXS TV. Stay close to ProMMAnow.com (www.prommanow.com) for all your XFC 19 news and fight results as we will be on the scene in Charlotte this Friday.