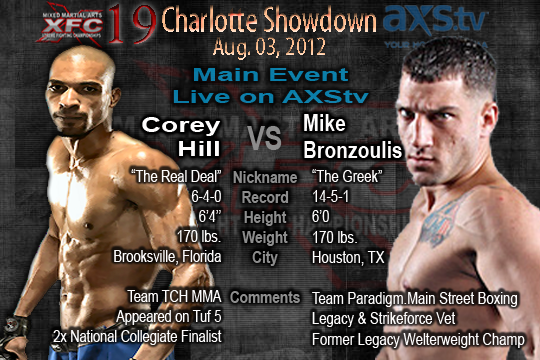 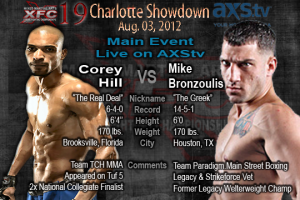 The XFC promotion will be invading Charlotte, North Carolina, on Friday, August 3rd, at the historic Grady Cole Center venue which was home to UFC 3. The event originally scheduled to be headlined by a welterweight fight between Corey Hill (6-4) and Jason South, but South withdrew from the bout due to personal reasons and was replaced by Mike Bronzoulis (14-5-1).

Bronzoulis has stopped 10 opponents in his 14 wins and fights with a crowd pleasing style and will have a huge experience advantage over Hill while Hill will have a huge reach advantage plus the advantage of being in camp for six weeks. Hill has four stoppage victories out of six fights, so it’s clear that he goes for the finish even in limited action.

This will be the first time the XFC promotion will host an event in North Carolina. There are many local fighters that are among the best in the southeast on the card that have solid followings in the state, so the atmosphere should be electric.

The event is presented by ICRealTIme Security Solutions and airs live on AXStv starting at 9PM ET. In addition to the Bronzoulis vs. Hill main event, XFC Fighters Felice Herrig and Nick Newell will also be featured on the first XFC event in North Carolina. To purchase tickets and more information, go to www.OfficialXFC.com and be sure to follow the promotion daily on Facebook and Twitter ‘@OfficialXFC’.