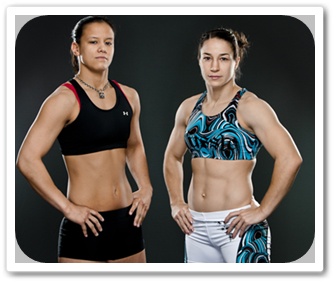 Invicta Fighting Championships will see a change to their upcoming fight card as Leslie “The Peacemaker” Smith (3-2-1) steps in to face Amanda Nunes (6-2) at Invicta FC 2: Baszler vs. McMann at Memorial Hall in Kansas City on July 28.

Nunes was originally scheduled to face Milana Dudieva in a women’s bantamweight matchup but Milana was forced to withdrawn from her commitment due to medical illness. News of the replacement was confirmed via press release today.

Leslie Smith last fought at Invicta FC 1 in April, where she recorded a draw against Kaitlin Young in a closely contested bout. Prior to that she lost to Ediane Gomes via unanimous decision at BEP 5 last October. Leslie’s last successful run was during 2010 when she defeated Louise Johnson via second round TKO, and Julia Griffin via unanimous decision.

In her most recent bout 24-year-old Nunes dropped a unanimous decision to Alexis Davis at the ‘Strikeforce World Grand Prix: Barnett vs. Kharitonov’ event last September. That loss snapped a six-fight winning streak in which Nunes had defeated notable fighters such as Vanessa Porto, Ediane Gomes, and Julia Budd. Widely considered one of the most dangerous women in MMA, Nunes will no doubt look to bounce back into the win column against Smith.