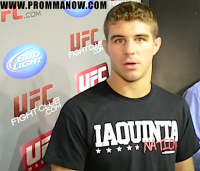 The Ultimate Fighter Live finalist Al Iaquinta (5-1-1) spoke with ProMMAnow.com and other media at Wednesday’s TUF Live Finale open workouts in Las Vegas. Iaquinta will do battle with fellow Team Faber lightweight Mike Chiesa (7-0) Friday to decide this season’s Ultimate Fighter winner and earn a six-figure contract with the UFC.

Iaquinta talked about his respect for Chiesa, getting to know him on the show and what it is like having to fight his teammate in the Finale. Having spent a good deal of time training with Chiesa, Iaquinta also talked about how that is going to play into the bout. Iaquinta also discussed what it is like to finally get away from the cameras inside the house only to be right back in front of them as his Finale bout draws near.