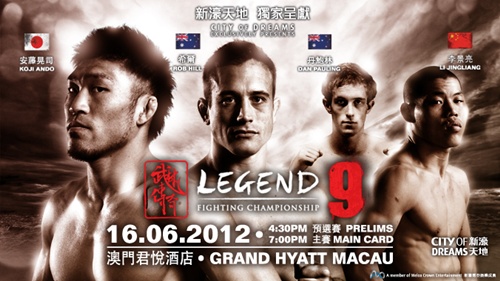 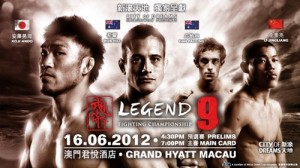 The Legend Fighting Championship 9 event is set to take place on June 16th, in the City of Dreams, Cotai, Macau. Koji Ando (6-3-2) will do battle with Rob Hill (11-5-1) for the chance to face reigning champion Jadamba Narantungalag for the Legend Lightweight Title later this year.

There will also be a four man bantamweight tournament to crown the next Legend Bantamweight Champion. Former title holder Yao Honggang (6-3) will battle Filipino Agustin Delarmino Jr. (6-1). The other side of the bracket will feature Japan’s Taiyo Nakahara (12-7) squaring off against Korean Jo Nam Jin (6-3).

Legend Senior Vice President, Entertainment and Projects, of Melco Crown Entertainment, had this to say about the event:

“Being the first entertainment resort featuring televised mixed martial arts (MMA) tournaments from Macau, City of Dreams prides itself in bringing the top MMA fighters from across Asia to Macau.  The excitement and action in the ring will surely capture the attention and passion of City of Dreams’ guests and Macau tourists in general, in addition to that of MMA enthusiasts in multiple continents watching the televised bouts.  Legend 9 is definitely another ‘can’t be missed’ entertainment offering at City of Dreams this summer.”

Tickets priced at HK$680* and HK$1,280* are available at www.cityofdreamsmacau.com, www.macau.com andwww.cityline.com. Hotel and ticket packages* at Grand Hyatt Macau, City of Dreams, Macau are available from HK$4,300. Please call +853 8868 1788 for reservations before June 8, 2012. Audience members aged 18 and above will enjoy free entry to the Legend 9 after0party and a free standard drink at Club Cubic in the City of Dreams upon presentation of a valid ticket stub.

Legend 9 will also be broadcast in 10 countries throughout Asia-Pacific and North America. For more information, please visit www.legendfc.com.