Over the years Mauro Ranallo has provided the vocal soundtrack for some of the most memorable moments in mixed martial arts history with his calls for Pride Fighting Championships, Strikeforce, and numerous other promotions. Those indelible moments in time are what have in part solidified Ranallo as having one of the most recognizable voices in all of MMA.

It was for that very reason Ranallo was chosen to narrate the audio book version of the novel “Caged: Memoirs of a Cage-Fighting Poet.” Written by Cameron Conaway, a former MMA fighter and award-winning writer, “Caged” is Conaway’s first hand account of the struggles he faced in his personal life as well as throughout his MMA career.

But bringing Conaway’s novel to life is much more than just another project for the iconic Canadian broadcaster.

“I’m very thrilled about this project,” Ranallo said. “It represents my first foray into something that I’ve wanted to do for a while. My mother is blind in one eye and because of her limited vision and whatnot I’ve always thought about giving back and getting into reading audio books for the blind. I’ve been so blessed in my own career that I truly believe in karma and getting out of life what we put into it.”

And while there is plenty of MMA talk in the novel to satisfy fans of the sport, it’s Conaway’s discussion of other topics, like his troubled relationship with his father, that make “Caged” appealing to a wider audience. 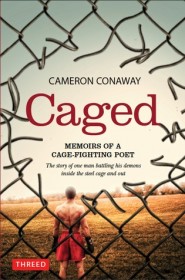 “It’s heartbreaking,” Ranallo said, “but it’s very relatable. Unfortunately for a lot of us we all go through different trials and tribulations in life, but the novel is definitely not just for mixed martial arts fans although they should pick up the book or listen to the audio version. It’s just one of those real inspiring books that I think everyone, no matter what age or demographic, can gleam something from.”

The theme of relationships, specifically with ones own father, was one aspect of the novel that brought back childhood memories for Ranallo.

“We all have unique relationships and so that’s something that I really related to,” Ranallo said. “My dad, who I love dearly and who is a terrific and tremendous man in his own right, comes from old school Italy and a very impoverished background where you weren’t really allowed to dream. You just had to do what you had to do to put food on the table and survive. Being the oldest of three boys maybe I was expected to be someone like my dad. He had a farm and I was feeding chickens when I was a kid but knowing full well that this is not the life that I envisioned or wanted. So it took a while I think for my father to truly understand who I was and because of that there are similarities in the book. I won’t say that my dad was by any stretch of the imagination as ruthless and as vicious as Cameron’s father is portrayed in the novel but yet we all are our father’s son so to speak.”

Currently, “Caged” is available in paperback and on the Amazon Kindle. Ranallo, who is almost finished recording the audio book version, hopes that the first chapters will be available to download soon on Podiobooks.com.

“The audio book was supposed to debut last week, but I hear there is some kind of vetting process that has to take place first,” Ranallo said. “I’m hoping that within the next week or so the first chapters will be available on Podiobooks.com, which by the way is a free service. The people behind it encouraged people to solicit donations to the author and in this case Cameron Conaway.”

But Conaway isn’t asking for donations for himself, instead he is urging individuals to make a donation instead to a bully prevention center.

“Cameron Conaway is really a name to look out for in terms of writers and humanitarians,” Ranallo said. “As we speak he is in Thailand doing research on malaria, and by asking for people to donate to a bully prevention center instead of asking for money for himself, it shows again how he has really committed his life to helping others through his words, poems, and through his deeds. I think we all can take a page out of that playbook and use it in our own lives.”

Mauro Ranallo (@MauroRanallo) is the host of The MMA Show (@TheMMAshow) Monday through Friday at 2 p.m. Eastern / 11 a.m. Pacific. The show is broadcast live on Radio.TheScore.com/live, and past episodes are available on iTunes.

You can also catch Mauro Ranallo along with Pat Miletich, Frank Shamrock, Heidi Androl, and the rest of the Showtime Sports crew this Saturday, May 19, when Showtime presents Strikeforce: Barnett vs. Cormier.