Fedor Emelianenko may retire after Pedro Rizzo fight in Russia 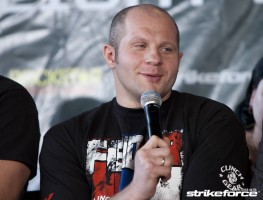 It has emerged that former PRIDE Heavyweight Champion and MMA veteran Fedor Emelianenko could potentially hang up his gloves after his next scheduled fight against Brazilian Pedro Rizzo. The fight between Fedor and Rizzo is set to take place on June 21st in St Petersburg, Russia.

The news of Emelianenko’s potential retirement came from a recent interview the fighter had with Russian news site Rianovosti. Fedor said:

“I think it’s time to call it a day” and then went on to say “This fight may be my last one.”

Emelianenko also said some words about his next opponent Pedro Rizzo:

“I have been learning from Pedro’s fights and have a lot of respect for him,” the Russian said. “He is a fighter of a great maturity, beating many of the strongest.”

Fedor began his MMA career back in 2000, since then he has gone on to fight for various promotions all over the world. He has built up a record of 33-4-1 taking on and defeating top heavyweights such as Antônio Rodrigo Nogueira (twice), Mirko “Cro Cop” Filipović, Mark Coleman, Andrei Arlovski and Tim Sylvia to name but a few.

The Russian is currently on a two fight winning streak since leaving Strikeforce as he defeated Jeff Monson and most recently Satoshi Ishii via TKO in Japan. Prior to the Monson victory “The Last Emperor” had lost three straight fights in Strikeforce against Fabricio Werdum, Antonio Silva and Dan Henderson. Many fans will be sad to see Fedor go but every fighter knows when it is their time to call it a day.