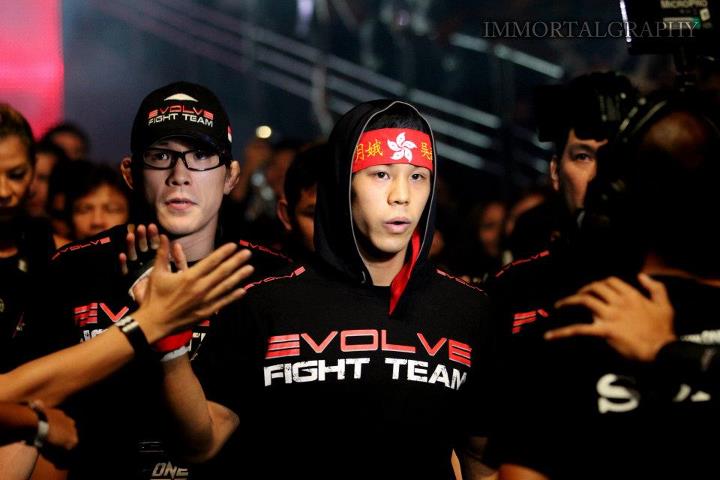 Seven minutes & 56 seconds, that’s all it has taken Eddie “The Magician” Ng to finish off 5 opponents. He did it again last Saturday at ONE Fighting Championship: War of the Lions defeating Malaysia’s Jian Kai Chee in 43 seconds. 43 seconds you say? Damn, that’s faster than the time I spent in line waiting for my Big Mac meal after War of the Lions. What’s more impressive is that Jian Kai Chee is no push over either. Kai Chee fights out of Malaysia’s top MMA gym, Muayfit and had a record of 3 wins and 3 loses going into the fight. Kai Chee has even fought and came close to defeating Ole Laursen at Martial Combat. Couple that with the fact that Kai Chee has had numerous muay thai fights prior to his meeting with Eddie, it’s pretty safe to say that Kai Chee is not someone you’d want to mess with. I certainly wouldn’t.

Fighting out of Asia’s number one gym, Evolve MMA, Eddie has become an enigma in the Asian MMA scene. He’s not the kind of guy who’ll talk a big game, he’s the kind of guy who’d rather remain silent, come into the cage and punch a hole in your face. He’s always calm, collected and ready for a fight. While being a very young fighter himself with only 6 professional fights, it seems that he’s ahead of his peers in terms of sheer athleticism. Many who have trained with him have commented that Eddie is a born athlete. Even his head coach, one of the best coaches in the world today, Chatri Sityodtong, has stated that he thinks that Eddie will be a world champion one day. How’s that for mad props?

With all that being said, it’s pretty obvious that Eddie will need to move up the ladder and take on much tougher competition. Even with only 6 fights under his belt, Eddie needs to step up and face the big boys of Asian MMA. So, like Bill Goldberg used to say it in WCW back in the day, “Who’s next?”

Well TFN thinks that these guys just might be the best challenge for Eddie “The Magician” Ng.

As much as people have doubted Ole going into the fight (we’re really sorry but we’re guilty) with Eduard Folayang, you have to admit that Mr. Iron Fist still has it. While people have been whining and moaning that Eduard was robbed, no one can deny that Ole put up one hell of a fight. Both Ole and Eduard put on an amazing match up at War of the Lions and either man deserved the win, it was just that close a fight. Ole Laursen can be considered a legend in Asian MMA having faced the best of the sport at the biggest stages in Asia, and a match with him would definitely raise Eddie’s stock to the next level.

Despite losing to Ole Laursen at War of the Lions, Eduard can still be considered one of the best lightweights in Asia. Even in his lost to Ole, Eduard looked strong in defeat. So much so that most of the crowd at the event still feel that Eduard won the fight. Eduard still has a very impressive 11-2 record. Furthermore, both Eddie and Eduard are perhaps the most well rounded lightweights around and they both don’t back down from a fight. Styles make fights, and these two would make an awesome fight. It would still be a huge step up for Eddie to face Eduard despite Eduard’s loss and a win over “The Landslide” would not only move Eddie up the rankings but also solidify his position of being one of Asia’s top lightweights.

Colossa is a veteran of the fight game with 41 kick boxing/ muay thai fights under his belt and he has a 4-2 MMA record. Colossa is considered one of the most dangerous strikers in Asian MMA. While a match with Colossa might not be as high profile as with Ole or Eduard, it certainly is a step up in competition that will give Eddie a nice gradual push up the rankings should he defeat “The Cheetah”.

If you’re a fan of Thailand’s DARE, you’ll know who Arnaud Lepont is. He’s a French Mixed Martial Artist who’s been making waves in the Asian MMA scene. It’s highly likely that “The Game” will be making his ONE FC debut shortly as a lightweight, and we think that a match between The Game and The Magician makes a lot of sense. Much like Eddie, Arnaud needs to step up the ladder and face tougher opponents. He has a 7-1 MMA record and is a very well rounded fighter. Another interesting note is that Arnaud trains out of Muayfit and is a team mate of Jian Kai Chee. It would interesting to see him try to avenge the loss suffered by his team mate. This would definitely be a match up that fans would pay to watch.

This possible match up, by far, excites us the most. With the partnership between ONE FC and DREAM, this fight could just very well happen. Satoru is a very tough opponent for any fighter and while he’s coming off a loss, that loss came from the best lightweight in the whole of Asia, Shinya Aoki. Shinya by the way, trains out of Evolve and is a team mate of Eddie Ng. That would be a huge advantage for Eddie and having Shinya in his corner might negate the fact that Satoru has much more fight experience than him. You’re probably thinking we’re a bunch of nut jobs for suggesting that Eddie Ng step up to a challenge this great in his young career. However, given how naturally gifted Eddie is and the fact that he trains in the best fight camp in Asia, Evolve MMA, he might just have the tools to beat Satoru. A win over an opponent such as Satoru will catapult Eddie Ng to international super stardom.