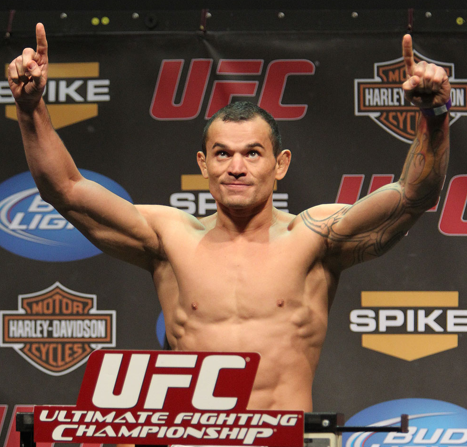 The upcoming UFc 148 card that will take place on July 7th, in Las Vegas, Nevada, continues to take shape as another lightweight bout has been announced by the promotion. The UFC announced via their website yesterday, that lightweights Gleison Tibau and Khabib Nurmagomedov will do battle.

UFC 148 will be headlined by the UFC bantamweight title bout with Dominick Cruz looking to defend his title against Urijah Faber for the second time. The co-main event will feature the third fight between former UFC light heavyweight champions Tito Ortiz and Forrest Griffin.

Gleison Tibau (25-7) is coming into this fight on a three fight winning streak after edging Rafael dos Anjos via split decision in his last bout at UFC 139. Tibau is actually (7-2) in his last nine bouts with the only two losses coming against Jim Miller and Melvin Guillard. Tibau is a huge lightweight with good wrestling and grappling abilities.

Khabib Nurmagomedov (17-0) won his UFC debut against Kamal Shalorus in dominating fashion, submitting the former WEC standout via rear naked choke in January of this year. Nurmagomedov fought primarily in Russia prior to his UFC debut, running his consecutive win streak to 16 before joining the world’s largest MMA promotion.

This bout should be interesting as Nurmagomedov is crafty on the ground and the majority of his wins have come via submission. The tentative UFC 148 lineup can be found below: