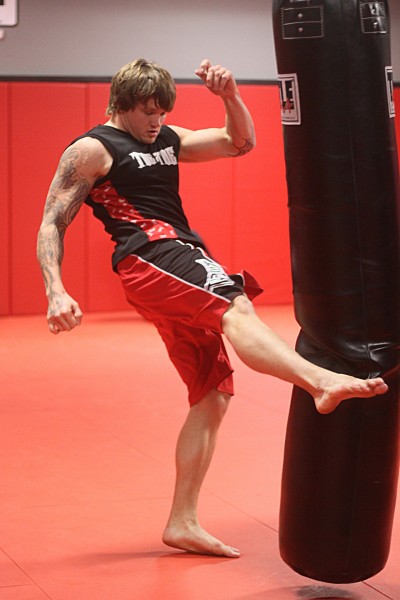 There has been something eating away at Jeremiah Riggs (7-5) over the past year. Instinctively, one might assume that it has to do with his third place finish on WWE Tough Enough this past summer, but that’s not what had the Mississippi native shadow boxing in parking lots by himself while visualizing his next fight. What’s eating at Riggs isn’t a return to the ring, but instead a return to his MMA roots.

Then Riggs got a phone call one day from long-time friend and former teammate Brian Foster. Bellator was interested, and after careful consideration, Riggs had confirmation of the answer that subconsciously he had known all along.

“I’ll never forget it,” Riggs said. “I woke up right around 1:30 in the morning and I sent my manager a text telling him to sign the [expletive] deal and let’s do this. I’m always pumped, but I can’t remember where something has been eating on me so bad that I woke up literally early in the morning like that. I sat up and I was ready. I promise you that if they had put me in the cage right then it would have been on.”

This Friday, March 16, at the Horseshoe Riverdome in Bossier City, La., Jeremiah Riggs returns to the cage to take on Trey Houston (8-0) at Bellator 61.

The fight, which will be broadcast live on Spike.com , will be Riggs’ first bout in more than a year since he defeated Eric Slocum via majority decision at SportFight X: Middle Tennessee Mayhem last January. Riggs, who is on a five-fight-win-streak said that despite the layoff, he feels better than he has ever felt before.

“I’ve never felt like I feel right now,” Riggs said. “This camp has been great. I’m on weight and I feel like a universal soldier. I feel more powerful, and I feel complete. I can’t wait until the fight. It’s going to be 100 percent all Jeremiah Riggs on the 16th and win, lose, or draw, it’s all going to be left in the cage.”

When the opening bell sounds Friday night Riggs knows that he will indeed need to be at his best when he takes on the undefeated Houston, who has made quick work of all his previous opponents.

“You’re not undefeated for nothing,” Riggs said. “Obviously him and his trainers are on a good track. He is finishing fights, but I honestly believe that he hasn’t fought anybody like me. I want to get in his face. I want to put him in uncomfortable situations, and I want to make him hate life. I want to make him know that he is in the fight of his life. That’s the key I believe to winning this fight.”

But getting the win this time means much more for Riggs than it ever has, because this time he will be donating a percentage of his purse and sponsorship money to Jacob’s Ladder, a school for children with special needs located in Vicksburg, Miss.

“Working with those kids over the past year to raise money for their school has opened up my heart and really changed me around to looking at things in a much different way,” Riggs said. “It puts it in a whole different mental and physical game for me. It’s something that when I know that cage door shuts I’m not just fighting for that win, I’m fighting for a school for kids that deserve a better setting and some good things. That fires me up.”

As for professional wrestling, Riggs said that he isn’t opposed to the idea of one day making a return to the squared circle.

“I don’t believe you would ever hear me say no,” Riggs said. “Anything is possible, and I would definitely get back in there. I love being around it and I’ve enjoyed learning it.”

But Riggs isn’t letting his future possibilities distract him from his present realities.

“I think my future is bright,” Riggs said. “But my biggest thing on that is that I’ve got Trey Houston standing in front of me, and when they shut that cage door on March 16 I know what I’m going to have on the table. He just better hope that he packed his lunch too.”