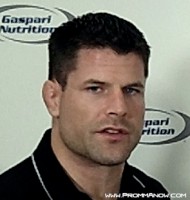 Stann returns to action at UFC on Fuel TV 2 on April 14 in Stockholm, Sweden, where he will face UFC veteran and BJJ black belt Alessio Sakara (15-8, 1 NC). Stann shared his opinion of Sakara and how he plans to approach the fight:

“I’m looking to finish. I go in to every fight thinking that, I just don’t like going to the judges, you really put yourself at risk. Looking at his skill set, I mean, he’s a very good striker, very technical, fast guy for 185. He’s really starting to add some more knees and kicks into his game from his boxing skills early in his career. And he’s got great jiu-jitsu as well and great takedown defense; an al-around great fighter. He’s been in the UFC a lot longer than me, so I’m honored to fight him and I think it’s going to be a really good exciting fight.”

Stann talked about his sponsor, Gaspari Nutrition, and which of their products he likes to use, and also discussed his new role as fight commentator for FOX and said he is in line to continue in that role throughout 2012.

UFC fans can follow Brian Stann on Twitter at @BrianStann. Also, be sure to check out more ProMMAnow.com coverage from the 2012 Arnold Sports Festival and stay close for still more to come!