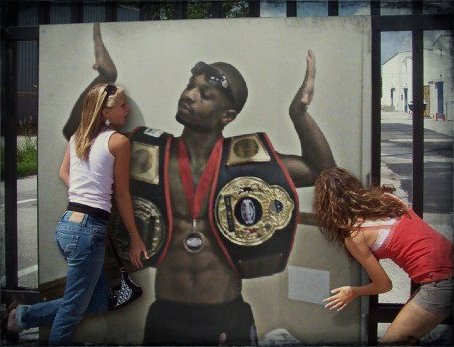 Cook attempted to get the fight to the ground early but was thwarted by the takedown defense of Wright, ending up with his back on the cage and absorbing a flurry of knees to the body. Wright continued to pressure Cook, keeping him against the cage and alternating between knees and short right hands in the clinch. Cook again looked for a way to get the fight to the mat by attempting a throw, but ended up on his back midway through the first round.

Wright punished Cook with big right hands from the top as he postured in the guard of his opponent. Cook managed to control the posture of Wright at times, but failed to get off his back as time wound down on the first round. With just seconds remaining in the round, Wright again postured up and rained down more big right hands that resulted in a large hematoma on the forehead of Cook.

The second round opened with Wright immediately closing the distance and putting Cook on the mat. Again, Wright was able to launch a ground-and-pound attack on Cook, as his opponent worked a high guard looking for an opening for a submission attempt. He found what he was looking for, securing a tight heel hook that forced Wright to roll for his life. Just as it looked like Wright may be in trouble, he managed to roll out and dislodge his trapped foot, then proceeded to dive right back into the guard of Cook. Wright then fought off an armbar attempt by Cook, and rained down more big right hands from the top. After a stall in the action late in the round, the referee restarted the fighters with only seconds to go in the round.

Cook came out desperately looking to get back in the fight in the final frame, firing off a spinning back kick that just missed it’s target. Wright ducked the kick and countered with a straight right hand that connected. Cook came back with an inside leg kick that found the groin, prompting a brief stoppage in the action. Once the fight restarted, Cook shot in for a takedown, but again failed to get the fight to the mat. Wright turned Cook into the cage and delivered punishing knees to the thighs before taking him to the canvas. From there, Wright went to work, alternating between shots to the body and big right hands to the head. Cook managed to kick off and get back to his feet, and then briefly secured a takedown off of a throw. Wright bounced to his feet almost immediately and then went to work with right hands to the body. Cook countered with knees up the middle as time ran out on the bout.