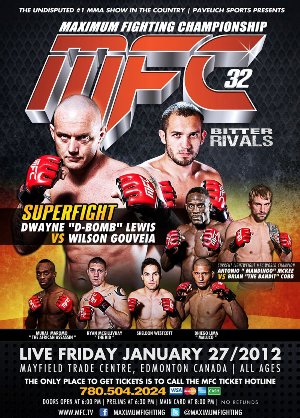 Now former MFC lightweight champion Antonio McKee was forced to relinquish his title after missing weight for what was to be a title defense against Brian Cobb. The bout will now be fought at a catchweight of 162 pounds. And MFC has said McKee will be released from the organization win or lose following the fight.

Press F5 on your keyboard to refresh the page as results and play-by-play will be updated in real time following each round of action.

Round 1 – Coy stalking, shoots, Lima escapes, tags Coy as he shoots for a single, puts Lima on his back. Coy standing over LIma holding his legs, tries to pass guard. Lima gets to his knees, stands, body shot from Coy before they break. They square up. Coy counters with a combo. Leg kick, punch, from Coy. Lima being tentative, not letting his hands go. Coy shoots, stuffed, elbow from Lima. Lima looking for a kimura as Coy sets him on his butt. Body shots from Coy, elbows to thigh of Lima. Lima lets go the kimura attempt. Coy in half guard. Lima recovers full guard. Coy postures up. Ref warns them to work; resets them in the center standing. Nice right from Lima. Coy with a left and a counter left right. PMN scores the round 10-9 Coy.

Round 2 – Right hand from Coy, left to body, right to face, body kick. Lima tentative and backing up. Coy with a leg kick, again. Coy looks for a takedown, eats a hook from Lima. Coy with a jab, shoots and dumps Coy on his butt. Moves to full mount; body shots. Lima gets full guard with his head in the corner of the ring. Coy postures up inside guard. Lima with wrist control. Ref stands them up in the center. Lima not doing anything offensive. Misses a high kick. Inside leg kick from Coy. Coy shoots for a single. Lima looks for a kimura as he gets put down. Lima lets the arm go. One-thirty left in the round. Coy smothering Lima. Progress or work says the ref and Coy lands a few punches before the bell. PMN scores the round 10-9 for Coy.

Round 3 – Left from Coy. Right. Lima knocks Coy’s mouthguard out with a jab. Ref halts the action to clean it off. Coy shoots for a single, eats several hammerfists from Lima but Coy puts him on his back, postures up inside guard with shots. Coy with a beautiful guard pass. In side control. Lima recovers half guard. Light body shots from Coy. Coy now inside full guard. Ref calls for action, stands them up. Left from Coy. Right hook from Lima. Coy slams him to the mat. Coy in half guard with under two minutes to go. Coy lands s couple knees to the body. Lima tries to get up but Coy pushes him through the ropes. Ref stands them up. Low single from Coy, eats some hammerfists but gets Lima on his back again. Coy trying to pass guard. Lima with hammerfists off his back. Lima looks for a triangle, gets slammed into the ropes. And it ends with Coy landing shots inside guard. PMN scores the round 10-9 and the fight 30-27 for Coy.

NOTE: Coy will fight the winner of McGillivray-Bautista for the MFC welterweight title.

Round 1 – Ryan with a significant height advantage. Touch gloves as they meet in the center. Left hook from McGillivray., jab. Body shot from Bautista. Ryan working the jab. Nice leg kick from Bautista, body shot, Ryan shoots, eats two rights. Bautista lets him up. Left hook from Ryan. Leg kick inside from Bautista. Big overhand right from McGillivray, Bautista ducks it. Big slam from Ryan, lands in side control. Moves to north-south, lets go of the neck. Side control, knee to the body. Left hand from McGillivray, looks for a keylock. Bautista slips out. Just over one minute left. Bautista tries to push off the ropes with his feet. Ryan controlling Bautista. Bautista gets to his feet as Ryan still has him in a front headlock. Bautista pushes Ryan to the corner with 15 seconds left. Ten seconds. Ryan still holding him. Cranks toward a guillotine as bell sounds. PMN scores the round 10-9 for McGillivray.

Round 2 – Fakes a jab, left hook from Ryan, misses a right. Right hook from Ryan. Left jab pokes Bautista in the eye. Ryan misses a punch, it goes to the ground and Bautista takes Ryan’s back quickly, locks on the choke. Ryan escapes, gets mounted, Bautista drops some shots, Ryan gives up his back. Bautista with both hooks in. Ryan spins around and ends up on top inside full guard. Beautiful. Ryan bleeding on Bautista’s chest. McGillivray working from top with punches, body shots and elbows. Under two minutes to go. More body shots. Ryan in half guard. He hooks up Bautista’s arm but he slips out. Ryan is cut on his hairline. The Voice keeps on and on and on about the blood. It’s really not that bad but he makes it sound like Friday the 13th. Ryan looks for a choke at the end of the round. PMN scores the round 10-9 for McGillivray. Replay shows it was an elbow from the bottom by Bautista that cut Ryan.

Round 3 – Ref wipes off Ryan, says he’s too slippery. They trade jabs. Front kick from Ryan. Left hook from Ryan. He misses a hook. Leg kick from Ryan. Body shot from Bautista. Bautista ducks a punch and Ryan slips to the ground, ends up on his back. Bautista  lays down inside his guard. Elbows from Bautista. Ryan throws up and armbar, spins, locks the legs, goes belly down for a second turns it over and Bautista taps out quickly. Ryan gets his hand raised with his daughter Peighton on his shoulders. Ryan said he tore his meniscus coming into this fight and he took a leg kick early on that blasted his knee. Ryan said he played possum to get the fight to the ground so he wouldn’t have to shoot on his knee again. It worked!

It was Ryan’s 10th submission victory.

Round 1 – Cobb misses a high kick and low kick. Side kick from McKee knocks Cobb down and into the ropes. Right hook from McKee. Cobb goes in for a double, eats a knee. McKee grabs a single, lets it go. Side kick knocks Cobb back, again. Knee to the face from McKee. Takes Cobb down after he hesitated. He suplexes Cobb. Cobb up. McKee puts him on his back and punches him outside the ropes as Cobb’s head goes under the ropes. Leg kick from Cobb. One two from McKee. Counter right from McKee snaps Cobb’s head back. This is the McKee we’ve wanted to see forever! He has nothing to lose now, might as well let it go, right? McKee shoots under a hook and puts Cobb on his back. Cobb gets to his feet as McKee looks for his back. Side kick from McKee. Knee from Cobb in the clinch. Foot stomps from Cobb. PMN scores the round 10-9 for McKee.

Round 2 – Leg kick from Cobb, again. Side kick from McKee. Cobb with a sloppy hook that misses. Leg kick from Cobb. High kick from Cobb, one two punch, he backs McKee up, leg kick. McKee shoots and puts Cobb on his butt. Cobb with butterfly guard. He pushes McKee back. McKee throws a couple shots, lays inside guard. McKee gets mount. Cobb gives up his back, gets to his feet with McKee holding around the body. McKee pushes him in the corner. Knee from Cobb to the body. McKee dumps Cobb quickly and lands in mount. Big right from McKee. Cobb gets to half guard, then to his knees and feet. Cobb comes forward with punches and McKee takes him down but Cobb gets right up. McKee with his hands down. He looks like he could be getting winded. Round ends with Cobb holding McKee’s neck from the side. PMN scores the round 10-9 for McKee.

Round 3 – Touch gloves. Body shot, one two up high forces a shot from McKee. Cobb ends up taking McKee’s back and goes for a choke. He has both hooks in. McKee escapes to his knees. Cobb riding him but ends up on bottom with McKee in side control. Two knees to the body as Cobb gets to his knees. He gets to his feet, sprawls as McKee looks for a single. Two minutes to go. Cobb riding McKee’s back, looking for the choke. McKee gets to his knees and Cobb riding his back, flattens him out. One minute to go. Cobb trying to soften McKee up. Can’t get the choke but at least gets the round. PMN scores the round 10-9 for Cobb but the fight for McKee 29-28.

Round 2 – Double jab from Gouveia. He checks Lewis’ leg kick. Front kick from Lewis. Gouveis with a leg kick, again. Lewis doesn’t like that. Another leg kick from Gouveis, has Lewis limping. Jabs from Gouveia. Leg kick and Lewis touches the ground, looks hurt. Gouveia locks on a guillotine, lets it go. Gouveia swarms, lands another leg kick and several punches, Gouveia’s leg is jacked. Gouveia takes his back but slides too high. Lewis has top position inside guard. Gouveia locks on a kimura, almost finishes. Lewis survives but Gouveia has his back as Lewis turtles up. He flattens him out and unleashes swarms of punches. Lewis covers up, offers no defense and the ref stops the pounding. Wow! I don’t think many people expected Gouveia to out-strike Lewis. Pat Miletich seems to think Gouveia may have broken Lewis’ leg with kicks.