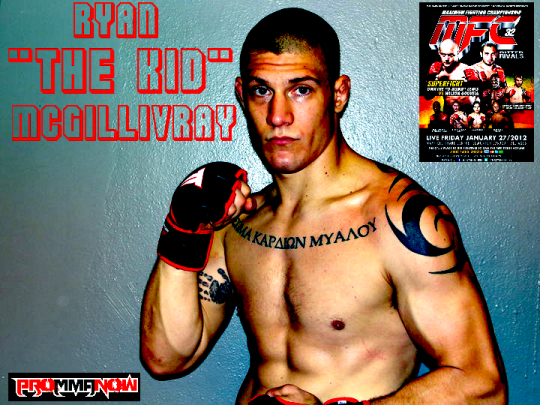 TUF 13 veteran and former ProMMAnow.com (www.prommanow.com) TUF 13 blogger Ryan “The Kid” McGillivray (11-5-1) returns to action this Friday, Jan. 27, for the first time since losing a unanimous decision to Shamar Bailey at The Ultimate Fighter 13 Finale in June of last year.

Born and raised in Edmonton, Alberta, Canada, the 25-year-old McGillivray will get to entertain his hometown friends and family when he squares off with Anaheim’s Diego Bautista (7-0) at “MFC 32: Bitter Rivals” at the Mayfield Inn Trade and Conference Centre. The event will air live on HDNet starting at 10 p.m. ET (7 p.m. PT).

ProMMAnow.com caught up with the fighter, father and gym owner this week to talk about his return to the MFC and where he feels the organization is headed. Ryan also shared his thoughts on Bautista and what he brings to the fight. He talked about his training, what he learned from The Ultimate Fighter experience, that sick broken nose photo and more!

PRO MMA NOW: Hi Ryan, thanks for talking with us just a couple days here before your return to action at MFC 32 where you will be taking on one Diego Bautista. First off, how are you doing, how is your daughter, how is everything at Legends and what have you been up to since we last saw you in the cage at the TUF 13 Finale?

RYAN MCGILLIVRAY: My daughter amazes me more and more everyday! She is growing into a beautiful young girl. Legends has been really taking off this past little while and we’re always improving our members’ experience. I have been just training and evolving my game as much as possible.

PRO MMA NOW: I saw the photo of where you broke your nose in training. Man that was pretty gruesome. Did they have to re-break it and how long did it take you to recover?

RYAN MCGILLIVRAY: Ya it was a broken in over 30 places and my orbital fractured in six places. Fortunately in our sport there are always ways around injuries. I took off a total of three days from the injury to training again for travel and surgery. I was in the gym the day after surgery running, hitting pads and drilling my ground game. I wasn’t able to spar for about a week with the help of a new headgear with a protective bar to protect my nose.

PRO MMA NOW: That is insane bro! It looks like they did a really good job fixing it. What is it like coming back after something like that, like when you return to sparring; how do you get over being tentative?

RYAN MCGILLIVRAY: I found it was exactly like a fight, I was tentative until the first time you get hit and you realize it’s not the end of the world. Each time I got hit harder it made me less tentative and more confident that I was going to be fine. It was a hurdle for sure but with great training partners, coaches, doctors and a team as a whole it was pretty smooth.

PRO MMA NOW: So, this will be your first fight back with MFC in a few years. Was there any particular reason for the absence and why was this the right time to sign back on with them?

RYAN MCGILLIVRAY: I think when I first fought for the MFC I was a young kid that had a lot to learn from a business standpoint and made it a learning process. A the time I felt like it was a good transition for me to step away, and perhaps it was as I needed some time to develop as a person and as a fighter in some smaller shows. I am back and with a vengeance. There is no denying that Mark and the whole MFC staff put on one of the best MMA shows, and I would be foolish not to want to be a part of that and to add myself to the product. I want and need tough opponents with great exposure and that is exactly what the MFC can offer me.

PRO MMA NOW: How do you feel about where MFC is as a promotion and where do you see them headed?

RYAN MCGILLIVRAY: They have always been in the top organizations and I feel they will continue to be there as well as improving their product. They have a great stable of fighters, very solid network deals which gets the fighters out to the public, as well as being one of the best ran organizations I have had the pleasure of being involved with.

PRO MMA NOW: Okay, Diego Bautista. Had you heard of him before this fight and have you been able to watch any film on him?

RYAN MCGILLIVRAY: The world of MMA is so huge it is so hard to follow every great fighter out there. I didn’t know much about Diego prior to being matched up with him, but he looks to be a very tough and exciting test. I have watched one of his fights but am not a huge film watcher. I understand that he is well-rounded, tough and unbeaten. I think it’s going to be a great fight and I am sure he is very hungry to get his name out there.

PRO MMA NOW: What is the scouting report on Bautista — what’s he working with?

RYAN MCGILLIVRAY: Like I said I am not one to over analyze what he is doing and more concerned with bettering myself and making sure I am ready for as much as possible.

PRO MMA NOW: Fair enough. Talk about your training for this fight and who you have been working with — I saw a photo of you at Jackson’s, was that for this camp?

RYAN MCGILLIVRAY: Yes I have spent three weeks of my camp in Albuquerque. I do the beginning of my camps here at home and then try to finish strong at Jackson’s MMA. It is advantageous in a number of ways and feel it has made me a much more complete fighter. I am very very privileged to be apart of the amazing gym and team that Coach Jackson has developed.

PRO MMA NOW: Looking back on the TUF show and your experience fighting in the UFC, what sort of impact did it have on you mentally — did it change anything about the way you see or approach your career in MMA either positively or negatively?

RYAN MCGILLIVRAY: Not so much, I know you’re only as good as your last fight and cannot ever stop striving to improve. If anything, it made me realize how close I am to being able to be a stable fighter in the UFC and that all my work and sacrifices have been worthwhile. I would say every experience you have to take the positives and learn from the negatives and that situation was no different for me.

PRO MMA NOW: Always good to catch up with you Ryan and we will be watching on Friday. Would you like to say any final words or give any shout outs?

RYAN MCGILLIVRAY: I would just like to thank all of my fans, friends and family that help me everyday be the fighter and man that I am and push me to be the fighter and man I will be. Also a huge thank you to all the amazing people who supported and donated to the Edmonton Children’s Stollery Hospital in my contest, it means so much to me.

ProMMAnow.com will provide LIVE results and play-by-play commentary for MFC 32: Bitter Rivals on Friday, Jan. 27 starting at 10 p.m. ET (7 p.m. PT). Fight fans can find Ryan McGillivray on Facebook and follow him on Twitter at @KidMcGillivray.