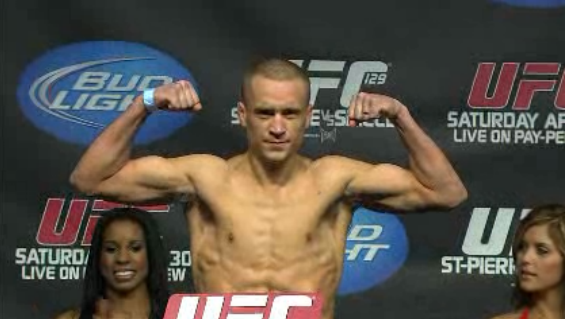 The UFC has announced two additional fights for the UFC 145 event that will take place on March 24, 2012, in Montreal, Quebec, Canada. The venue is expected to be the Bell Centre.

Mark Hominick will face Eddie Yagin in a featherweight bout and Matt Wiman will face Mark Bocek in a lightweight bout.

Hominick (20-10) is coming off a devastating upset KO loss to Chan Sung-Jung back at UFC 140. He also lost a unanimous decision to Jose Aldo in his title shot back at UFC 129 last year, so he’ll certainly be looking to avoid his third straight loss in the UFC.

Yagin (15-5) is coming off a unanimous decision loss to Junior Assuncao back at UFC 135 in his UFC debut. Yagin holds a win over Bellator season one featherweight champion Joe Soto.

Wiman (14-6) is coming  off a grueling unanimous decision win over Mac Danzig back in October 2011. Wiman has won four of his last five with the only loss coming against Dennis Siver via unanimous decision in a really close fight.

Mark Bocek (10-4) is coming off a unanimous decision win over Nik Lentz which took place last week at UFC 141. Bocek is (2-2) in his last four fights with both losses coming against top lightweights Ben Henderson and Jim Miller via unanimous decision.

The tentative UFC 145 can be found below:

One thought on “Mark Hominick vs. Eddie Yagin, Matt Wiman vs. Mark Bocek set for UFC 145”