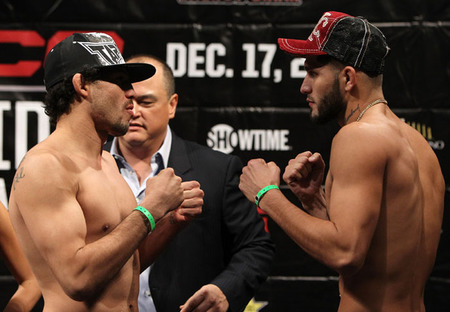 Gilbert Melendez once again proved that he is one of the top pound-for-pound fighters in the world with his one-sided domination of challenger Jorge Masvidal. Melendez cruised to an easy unanimous decision victory (50-45, 50-45, 49-46) in the main event of tonight’s “Strikeforce: Melendez vs. Masvidal” event.

Stylistically, Masvidal appeared to be a tough match-up for “El Nino”, but Melendez proved that he doesn’t need repeated takedowns to dominate and win a fight.

Melendez found a home for his jab early and followed up with two, and three-punch combinations for every punch that Masvidal managed to land. Masvidal landed multiple flying knees, but nothing could disrupt the timing and rhythm of the champion. Melendez locked up a guillotine attempt, and then followed up with knees and combinations to close out the first round.

The second round saw more of the same as Melendez continued to pour on the combinations. Masvidal tried to counter and did nice work to the body, but the champion simply outworked him, landing several nice counter-right hands over the top as the challenger tried to establish his leg kicks.

The champion came out in the third feinting takedown attempts, which seemed to throw off the rhythm of Masvidal’s striking. The challenger once again failed to follow up after landing his jab, resorting to one-and-done striking while Melendez continued to land combinations.

Going into the championship rounds, it looked as though “El Nino” was pitching a perfect shutout. Melendez continued to pepper Masvidal with double and triple jabs as the challenger appeared confused and desperate. The challenger did visible damage with his jab, bruising and swelling the right eye of Melendez, but was unable to get any type of combinations or flurries on track.

“I had to do what I had to do,” Melendez said. “Jorge isn’t the easiest matchup, especially stylistically for me. But I beat him at his own game. I think I’m better than a decent striker.

Melendez (20-2 MMA, 10-1 SF) extends his win streak to six, earning his third straight title defense. With the news that Melendez will remain with Strikeforce and not make the jump to the UFC anytime soon, the question arises as to who will challenge him for the title in the future.

“I’m proud to be a part of Strikeforce,” Melendez said. “Showtime is amazing. But you know what? They need to bring some guys over here to challenge me. I’d like to challenge the champ, whoever it is in the UFC. Come to my hexagon, and let’s fight.”