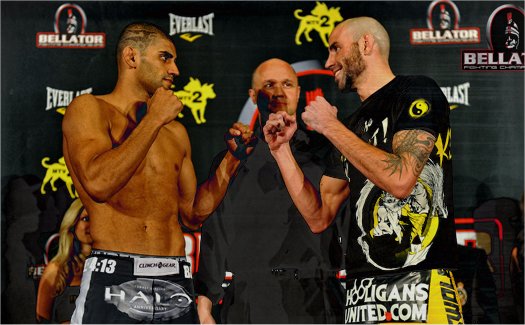 In the main event, Ben Saunders will battle Douglas Lima in the welterweight finals, while in the co-main event, Alexander Shlemenko and Vitor Vianna will clash in the finals of the middleweight tournament.

Press F5 on your keyboard to refresh this page, as play-by-play is updated in real time.

Round 1 – Bezerra lands the jab first, but Evans comes back with a stiff jab of his own. Big lead left hook from Bezerra as Evans swings and hits nothing but air on the counter. Big leg kick from Bezerra. Nice exchange from both, and then Bezerra shoots and gets a takedown from way outside. Evans gets back up but only for a moment as he finds himself on the bottom after the second takedown attempt. He kicks off and scrambles, then gets caught in a guillotine. Evans elevates Bezerra and slams his way out of the submission. Evans is now on top. Bezerra grabs an arm and Evans is in trouble. He lifts Bezerra off the mat and slams him to the canvas, freeing his arm. Bezerra gets the arm again but Evans is out, and delivers a couple of hammerfists from the top. The right eye of Bezerra is swollen very badly now as Evans dives in and lands a right hand. Bezerra grabs a foot and is going for the heel hook. Evans is trying to fight his way out but he’s in trouble. Bezerra readjusts his grip and the tap comes quickly.

Round 1 – No touch of gloves for this one. Hawk jabs early, and Hollett lands a leg kick. Big reach advantage for Hawk in this bout. Spinning back kick from Hollett. So far Hollett is kicking more, while Hawk is trying to establish his jab. Another jab from Hawk, and Hollett counters with the left hook. Hawk is still pumping his jab although it’s not landing real consistently so far. Hollett goes with a right hand to the body, then steps in and lands a big left hook. Hollett is still scoring with his kicks. Triple jab from Hawk. Hollett lands a big right hand over the top, and he’s looking for the kill. Hollett is staying patient after a brief stoppage for a groin kick. Hawk throws an awkward 3-punch combo but Hollett avoids most of them. Another spinning back kick scores to the body flush for Hollett. Hollett is landing the more significant strikes in the first round. More kicks from Hollett as Hawk comes forward and lands a right hand before clinching. Short knees from Hawk as he presses Hollett against the cage. They disengage just before the bell. First round goes to Roger Hollett.

Round 2 – More of the same to start with Hawk jabbing and Hollett kicking. Hawk coming forward now and grabs the legs looking for a takedown but Hollett is free. Nice jab from Hawk now. He’s being more aggressive in this round. He clinches and puts Hollett on the cage. Short knees to the thighs from Hawk. After a stall in the action, the referee steps in and breaks them up. Straight right hand from Hawk after the double jab. Another kick from Hollett. Big right hand from Hollett as Hawk comes forward looking to clinch again. Knees and foot stomps from Hawk as he presses Hollett into the cage. More knees from Hawk but little else from either guy in this position. Hollett pushes off and circles out. Hawk fires off a four-punch combo but good head movement from Hollett avoids any damage. Lead left hook and to the body with the right from Hollett. Big body shot from Hollett after Hawk lands a straight left hand. Back to the clinch with a minute to go in the round. Hawk has been busier in this round, but Hollett has landed the more damaging strikes. Double jab from Hawk, and then a right hand. Hawk goes back to the clinch again and lands with a couple of knees. Round 2 goes to John Hawk.

Round 3 – Hawk coming forward again and Hollett lands the right hand before getting put on the cage. Hollett circles away from the cage and fires off a knee before stepping away. Hollett with the kick again. Hawk closes, clinches, and puts Hollett on the cage again. Hollett pushes off and takes the center of the cage. Hollett lands a nice right hand to the body, but Hawk clinches and puts him right back against the cage. That’s pretty much been his strategy the whole fight. A right hand on the break from Hawk dislodges the mouthpiece of Hollett. It’s put back in and Hawk immediately goes back to the clinch against the cage. More knees from Hawk. Boos erupt from the crowd as Hawk holds Hollett on the cage. The referee steps in and separates them, but Hawk goes right back to his strategy. Hawk lands with some dirty boxing this time and Hollett is bleeding badly out of his left eye. They break for a moment but Hollett finds himself right back on the cage again. Hollett pushes off, takes the center of the cage and lands a flush right hand that snaps the head of Hawk back. Left hook scores from Hollett again, and Hawk has had enough of that, putting Hollett on the cage again. They separate again and Hollett lands a spinning backfist, but Hawk again goes back to the clinch. Round 3 goes to Hollett. ProMMAnow.com scores the bout for Roger Hollett, 29-28.

Round 1 – Tentative start to the fight as both guys size each other up. Shlemenko comes forward and fires off a combo. Vianna returns fire and Shlemenko backs off. Shlemenko with the one-two combo then a knee. Vianna gets the bodylock and looks to put Shlemenko on the mat. Shlemenko defends and Vianna pushes off and steps away. Big right hand from Vianna as Shlemenko stepped in for a knee. Shlemenko comes forward and locks up the plum clinch then throws a few knees. To the body now. Vianna turns and puts Shlemenko on the cage and throws a nice three-punch combo. Shlemenko comes forward with a spinning back punch, and then lands a big left hand. Vianna remains composed and clinches, but his back is on the cage. Shlemenko fires off a left hook on the break. Spinning back kick lands for Shlemenko. He then comes forward throwing but Vianna defends very nicely, then lands a leg kick. Stiff jab from Shlemenko, and then he locks up Vianna on the cage. He steps away for a moment before coming forward with a flurry. Vianna counters nicely with a right hand. Big right hand lands for Shlemenko after his first two punches miss. Vianna lands a nice one-two combo just before the bell. Round 1 goes to Shlemenko.

Round 2 – Shlemenko lands a kick to the body to start. Vianna has to get busier this round. He comes forward but Shlemenko scores with a right hand as he steps away. Shlemenko with the one-two-three combo and all of the punches land. He lands a kick to the body, and Vianna steps away. Shlemenko grabs a single, and fires off a left hand before stepping back. To the body now. Shlemenko is landing just about everything he is throwing. Vianna hasn’t done much this round. Just as I type that he lands a body kick, but Shlemenko comes forward and lands a furry. He’s opening up his striking game now, throwing a variety of kicks and strikes. Vianna is coming forward now, and he has too if he wants to get back in it. Nice jab from Vianna. A groin strike stops the action for the moment as Vianna takes the low blow. Back to the fight now. Vianna scores with the kick again, but Shlemenko counters with a spinning backfist again. Four punch combo from Shlemenko at the end of the round, and he takes this one too, 10-9.

Round 3 – Vianna needs a stoppage in this round if he wants a victory. He’s coming forward to start, but eats a bodyshot from Shlemenko. Shlemenko comes forward and lands another flurry of strikes. Vianna counters with a right hand, but it’s one-and-done for him. Shlemenko is landing punches in bunches again, and just misses with the head kick. Shlemenko has his hands down by his waist now, and it looks like target practice in this one. Another spinning backfist, and Vianna ducks under it and finally gets the fight to the ground. Shlemenko scrambles and gives up his back but scrambles up to his feet. He’s out of danger and he steps out and away. Back to the body now from Shlemenko. Again. Vianna scores with the jab, but it’s way too little, too late. Another jab after Shlemenko comes forward for Vianna. Left hook in close from Shlemenko. Vianna looks exhausted. To the body again from Shlemenko. Total domination in this one. Under a minute to go now. Big left hand to the body from Shlemenko. Vianna tries a spinning backfist and ends up on the ground. He gets back up just before the bell. The round and bout goes to Alexander Shlemenko, 30-27.

Round 1 – Saunders goes high but the kick is blocked to start. Lima fires off a kick. Both guys kick and then Saunders clinches. Lima turns him and puts him on the cage. Saunders reverses and puts Lima’s back onto the cage. Saunders fires off a short knee as the referee calls for action. He stops them and they take the center of the cage. Saunders flashes his jab then kicks before shooting again. Back to the clinch now as Saunders presses Lima into the fence. Knees to the thigh now from Saunders. Lima fights for double underhooks and gets them, then turns Saunders into the cage. After a stall, the ref restarts them again. Push kick and leaping right hand from Saunders as Lima circles away. Inside leg kick from Lima now. Another. They close and Lima presses Saunders into the cage. The referee is calling for action again. Lima lands with the right hand in the clinch, but they are restarted again. Close round. Lima catches the kick of Saunders and he’s on top. Saunders sweeps and is now on top and in full mount. Elbows from Saunders now. Short, grinding elbows again. That might be enough to win the round for Saunders. Round 1 goes to Ben Saunders.

Round 2 – Lima scores first in the second round with the inside leg kick. Saunders closes and Lima clinches. Lima with a nice knee in the clinch. He has Saunders on the cage. He drops for the takedown but it’s defended by Saunders. The referee stops them again and separates them. Back to the center of the cage. Saunders lands the inside leg kick, then comes back with a body kick. Saunders comes forward and eats a right hand that floors him. Lima pounces and delivers a flurry of hammerfists before the referee can intervene. Lima wins the tourney by TKO in the second.
Round 3 –