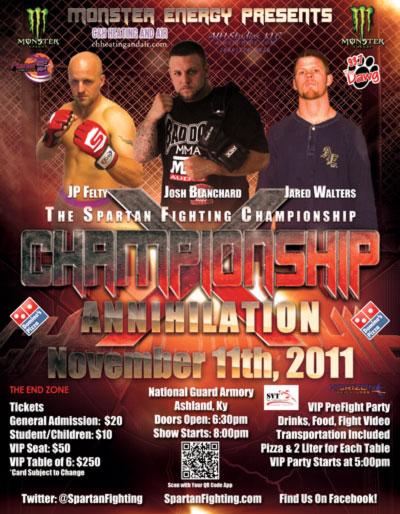 ASHLAND, Ky. — A packed National Guard Armory in Ashland was witness to a historical night in Kentucky MMA on Friday, Nov. 11. It was a fitting venue for a Veteran’s day fight card, and although by fight time the card was whittled away to just six amateur and two professional bouts, no one left the venue disappointed.

Several fighters upped their stock and one fighter captured a professional championship, the first of its kind in the Commonwealth. The Kentucky Boxing and Wrestling Authority was on hand to oversee the action with a veteran of  UFC, Strikeforce and Bellator refereeing the madness inside the cage and a terrific ring announcer to call the action.

This was SFC’s first venture into online pay-per-view and I had the pleasure of doing the play by play on Go Fight Live. I spoke with several fans after the event who were very excited. One fan told me that it was his first time at an MMA show and that he would return to every event. Some of the area’s most respected gyms such as UNICA MMA, Ground Zero-Huntington and Vision MMA were represented.

Spartan Fighting Championship will be  back at the Armory on January 13th with the return of local professional Jason Butcher looking to take the spot as SFC light heavyweight champion.

Here are the results from “Spartan Fighting Championship 10: Annihilation”.