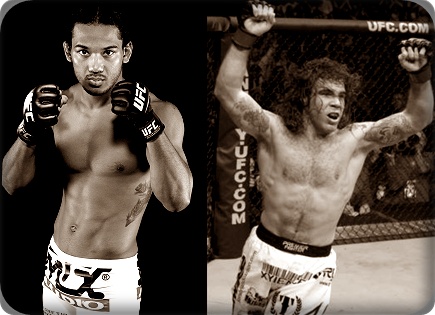 The UFC on Fox show will feature an outstanding lightweight matchup between Ben Henderson and Clay Guida in a fight that will most likely determine the #1 contender to face current champ Frankie Edgar. This fight will not be shown on the FOX broadcast, but can be viewed on the UFC Facebook page or Fox.com. Let’s see how this one shakes out.

Clay Guida comes into this fight with a career record of (29-11) with 15 wins via submission and five wins via TKO/KO. Guida was last seen in action grinding out a decision win against Anthony Pettis back in June. Guida has won four fights in a row with three of them by submission. Guida hasn’t tasted defeat since losing back to back fights against Diego Sanchez and Kenny Florian. Guida is a wrestler that is versed in submissions, but is most notable for his relentless cardio pace and wild looking hair. He generally has problems with guys that can stop his takedowns, and he is also prone to submissions at times as over half of his losses have come via that method.

Ben Henderson comes into this fight with a career record of (14-2) with eight wins via submission and two wins via TKO/KO. Henderson was last seen in action dominating top ten lightweight Jim Miller to win a unanimous decision back in August. Henderson has won both of his UFC fights since coming over in the merge of the WEC/UFC. Henderson has a background in wrestling, tae kwon do, and is well versed in jiu-jitsu. He is also known for his relentless cardio and ability to get out of submissions. If there’s a knock on Henderson it may be that he will give up takedowns at times due to putting himself in bad positions to defend against them.

Bet on Fighting has Henderson as the betting favorite at (-240) with Guida as the underdog at (+190).

I agree with those odds as I think Henderson does everything better than Guida, and he can match his pace which is probably the most important thing.

I went back and watched the Henderson/Miller fight and if that same Henderson shows up on Saturday night, Guida will get demolished in my opinion. Henderson is the better striker, better wrestler, and he’ll be the larger fighter in there on Saturday.

This fight will come down to whether or not Guida is able to take Henderson down. He’ll be in for a long night at the office if he can’t. Also, on the flipside of that, Guida will need to stop the takedowns of Ben Henderson. Guida isn’t a threat to submit anyone off his back and Henderson is virtually impossible to submit anyways. Henderson on top will be big problems for Guida with ground and pound that would probably force Guida to give up his back allowing Henderson to choke him out. Guida has problems on the ground when the pressure is on and that certainly could be the case on Saturday night. If the fight remains on the feet I think Henderson has a clear advantage there, but he’ll need to be weary of Guida catching his kicks and taking him down.

Ultimately, I think Henderson will be able to get Guida on his back and impose his will and either win a dominant decision or win by submission.