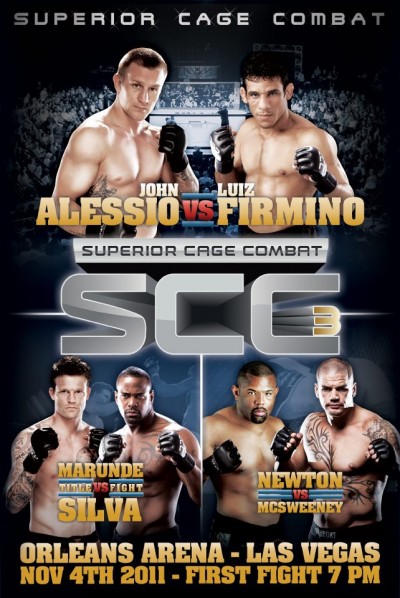 Alessio, who fights out of Xtreme Couture in Las Vegas, is coming off a second round rear-naked choke victory over Shawn Fitzsimmons at Superior Cage Combat’s  last show, SCC 2, in August. ProMMAnow.com (www.prommanow.com) spoke to the 32-year-old Canadian this week about his thoughts on fighting Firmino:

” He’s a very good opponent. He brings in a good record of 20-5. … MMA fans will know who he is from watching Pride, Dream, all over Japan where he has competed at a very high level. His losses are to only to very tough guys, and to guys that are where I’m aspiring to be right now in that lightweight top 10. “Buscape” is a great opponent, and people are going to get to see him here in the United States. It’s just too bad that he’s got to fight me here, because this is the best John Alessio in 46 fights that I’m ever going to be.  I’ve never been this focused, determined, motivated–all those words. It’s a shame I’m going to have to put him down.”

Firmino is the real deal. From his days fighting in the World Vale Tudo Championship, M-1 Global, Shooto, Pride and Dream, the 29-year-old Brazilian brings a ton of experience to the cage. However, he has not been very active as of late.

His last fight was in Feb. 2010 when he lost a first round submission via kneebar to Francisco Dinaldo at Bitteti Combat 6. Just prior to that he won a unanimous decision over Ryan Healy at “Shine Fights 2: ATT vs. The World” in Sept. 2009.

In the co-main event, Superior Cage Combat will hold its first ever five-round title fight as middleweights Bristol Marunde (14-6) and late replacement Jay Silva (7-4) clash for the gold. Marunde is undefeated inside the SCC cage, having defeated Chuck Grigsby via unanimous decision at SCC 1 back in May and then submitting Victor Moreno via kimura in the first round at SCC 2 in August.

Jay Silva is a Bellator and UFC veteran who took this fight on just a few days notice. He trains alongside such fighters as Mark Munoz and Jake Ellenberger at Reign Training Center and is coming off a unanimous decision victory over Gemiyale Adkins at Bellator 44 in May. Prior to that he scored a 33 second knockout win over “El Cucui” Jaime Jara at Tachi Palace Fights 7 last December.

TUF 10 alum and UFC veteran James McSweeney (6-8) will continue his efforts to get his record back above the .500 mark as he takes on Emanuel Newton (16-6-1) in light heavyweight action. McSweeney, a former heavyweight, has stopped his last two opponents in the first round, one by way of submission and one by knockout. Newton is on a four-fight win streak.

The complete SCC 3 fight card is as follows:

The action kicks off Friday night, Nov. 4, at the Orleans Arena starting at 7 p.m. PT. Visit www.superiorcagecombat.com for tickets and more event info.