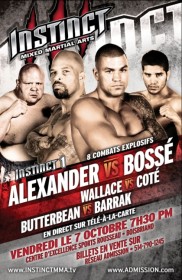 Former UFC light heavyweight Houston Alexander suffered a second round knockout loss (via elbow) from 30-year-old Canadian up-and-comer Steve Bosse in the night’s main event. Bosse, with a record of 9-1 and seven wins via (T)KO, is a light heavyweight to watch.

In the co-main event, former UFC middleweight standout Patrick Cote took home a first round TKO victory over Crafton Wallace after Wallace suffered a leg injury early into the fight and was unable to continue.

Also on the card, 33-year-old 240-pound heavyweight Eric Barrak made his pro MMA debut by submitting legendary big man Eric “Butterbean” Esch via guillotine choke in the third round.

The full results for “Instinct MMA: Instinct Fighting 1” are as follows: 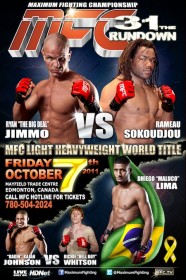 Stay tuned because we have videos of the Bosse vs. Alexander, Barrack vs. Esch and Cote vs. Wallace fights coming in a matter of minutes!

Another MMA event that took place up North Friday night was “MFC 31: The Rundown“, which was held at the Mayfield Inn Trade and Conference Centre in Edmonton, Alberta, and aired LIVE on HDNet.

Ryan Jimmo held onto his Maximum Fighting Championship light heavyweight crown with a unanimous decision victory over Rameau Thierry Sokoudjou in the night’s main event. In a new experimental half-point scoring system, all three judges scored the bout for Jimmo: 49-48.5, 49-48.5 and 49-48.

In the night’s co-main event, Kajan Johnson, representing TriStar Gym, took advantage of a failed takedown attempt by TUF 9 vet Richie Wilson, took his back and sunk in the choke at 3:52 into round one.

The complete results for “MFC 31: The Rundown” are as follows: