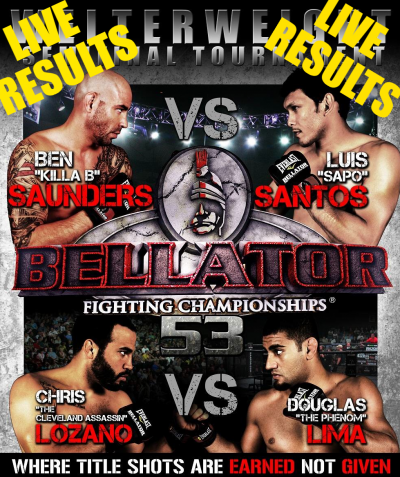 Page will be updated in real time following each round, refresh!

Round 1 – Leg kick to start from Santos as Burns comes forward. To the clinch now as both guys fight for position. Burns has his back on the cage. Not much action here as both guys land a few knees and each guy goes to the body. The referee calls for action. Santos drops and grabs a leg and is looking for the single. He slings Burns to the ground and is now landing big shots from the top as Burns is turtled up. Burns scrambles to his feet but is dragged back down to the mat. Burns on his knees again with Santos standing over his backs landing punches. Burns postures up and gives up his neck, and Santos grabs it, applies the rear naked choke, and the tap comes almost immediately.

Round 1 – Mann fires off a kick to the body after a brief feeling out period. Mann is headhunting, throwing back-to-back head kicks, but they are blocked. Foster lands a nice jab just as Mann throws a kick. Big right hand from Mann, but Foster ducks back in and gets the take down. Foster on top and in the full guard of Mann now. Mann is controlling the posture of Foster nicely and isn’t taking much damage from the bottom. He throws his legs up looking for a possible triangle. Foster works free and tries to pass, but Mann keeps moving and locks Foster up in half guard. The referee is threatening to stand them up and he does. Mann comes forward immediately with another kick. Flying knee connects for Mann. To the body by Foster, then he shoots in and gets the fight to the mat. Back in the guard of Mann. Mann is walking his legs up again and he has the triangle locked up. Foster taps and it’s all over.

Round 1 – Jab from Lima, one-two from Lozano to start. Leg kick from Lozano, but Lima lands one that’s much more powerful right after. Push kick from Lima. Lozano fires off another kick and Lima catches it. Big jab, right hand from Lima. Lozano ducks in to close but Lima angles out. Leg kick from Lima, and Lozano lands a huge right hand. Lima is on the ground, but scrambles up and lands a big uppercut up the middle. Nice stiff jabs from both guys. Right hand from Lima and he steps back just as Lozano counters with kicks. Nice exchange, both guys are throwing power shots. Clinch now with Lozano against the cage. Lima gets the take down but Lozano gets back to his feet, and is bleeding badly below his eye. Clinch again Lima lands a knee, Lozano lands a big right hook and is talking trash at the bell. Very exciting first round. 10-9 Lima.

Round 2 – Kicks by both guys. Lozano misses upstairs with a kick, then lands a spinning back kick. Lozano comes forward and eats a counter right hand off his kick. Lead right hand from Lima. Nice back-to-back jabs from Lima. Superman punch, flying knee by Lozano but Lima avoided both. The pace is slowing now as both guys are feinting strikes. Nice exchange but Lima’s strikes are cleaner. One-two combo by Lima, right hand from Lozano. Chopping leg kick from Lima. Double jab from Lozano, then to the body by Lima. Jab, then HUGE right hand by Lima drops Lozano and he’s OUT! Lima lands one more right hand before the referee can intervene.

Round 1 – Saunders kick, Santos slips, but gets up and takes Saunders down. Saunders wall walks and is back up on his feet, but is still pressed against the cage. Santos elevates him but can’t get the take down. Santos pulls him off the cage and goes for the slam but Saunders grabs the cage. This time Santos gets him to the mat. Rubber guard from Saunders on his back. He’s pressed against the cage, but is controlling the posture of Santos, then he swings his leg over and gets the triangle. Santos is fighting it off but his arm is trapped even though he gets his head out. Saunders has the shoulder secured with the omoplata and is landing very nice repeated left hands from his back. Saunders extends the arm and almost gets a straight armbar, but Santos is still defending. Saunders still has the arm secured, and is still firing off left hands. Saunders shifts his hips and looks to finish with the omoplata. Santos scrambles but is in danger of the triangle again. He’s finally free, but Saunders is threatening again with the rubber guard. He has a TIGHT triangle this time with under twenty seconds to go. Santos has his head just outside of danger, but he still has the arm stuck. End of the round. Saunders 10-9, easy.

Round 2 – Saunders kicks and slips and now Santos is on top. Usually that’s a good thing but after the way the first round went, Santos may NOT want to be on top. Saunders goes back to the rubber guard, and again has the arm trapped. This time Saunders punishes the body with right hands. Santos scrambles, but the omoplata is super tight this time. Santos rolls and ends up in the full guard, but AGAIN, Saunders has a triangle attempt. Saunders is smiling on his back, looks like he’s having a blast in there. More left hands, and the arm of Santos is still trapped. Two minutes to go, but Santos is in the exact same position. Santos tries to step over the body of Saunders but he’s blocked. Saunder is now looking to finish with the omoplata, that shoulder is in deep trouble. Santos rolls and Saunders is on top landing left hands to the body and head. Total domination from Saunders. Easy round for Saunders, 10-9.

Round 3 – Saunders feints twice then fires off a head kick that is blocked. Santos shoots but is stuffed and now Saunders is on top. Santos is going for a leg, but Saunders maintains control and passes to side mount. Santos sneaks a leg in and now has Saunders in the half guard. Saunders is looking for an Americana now. It looks bad, but Santos motions that he’s ok. Saunders keeps applying pressure and the tap comes. Total domination.