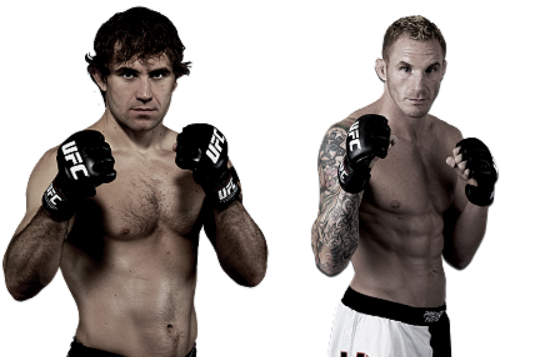 ProMMAnow.com (www.prommanow.com) continues our preview of the UFC Fight Night 25 main card by taking a look at the middleweight match-up between veterans Alan “The Talent” Belcher (16-6) and Jason “The Athlete” Macdonald (25-14).

Wins 16
By knockout 8
By submission 6
By decision 2

Losses 6
By knockout 2
By submission 1
By decision 3

The second thing you should know is Belcher has been out of action since May of last year when he submitted Patrick Cote via rear-naked choke in the second round at UFC 113 in Montreal.

It was Belcher’s second straight win following a split decision loss to Yoshihiro Akiyama at UFC 100 in July 2009.

Following the fight with Cote, Belcher was scheduled to face Demain Maia in the UFC Fight Night 22 main event in Sept. 2010, but was forced to pull out of the event and underwent emergency eye surgery for a detached retina after he began losing vision in his right eye.

Belcher said he began sparring again around April or May and wants to prove he is back better and stronger than ever. Belcher made his UFC debut in 2006 and has gone 7-4 inside the Octagon.

Losses 14
By knockout 5
By submission 4
By decision 5

The 36-year-old MacDonald is approaching his twelfth year as a professional MMA fighter. “The Athlete’s” first UFC incarnation lasted from 2006-2009 where he amassed a record of 5-5.

MacDonald then went back to the Canadian fight circuit where he went 3-1, picking up three straight wins over Solomon Hutcherson, Vernon White and Matt Horwich.

MacDonald returned to the UFC in May 2010 against wrestling standout John Salter. During a takedown attempt by Salter in the first round MacDonald suffered a broken leg, the fight was stopped and ruled as a TKO loss for “The Athlete”.

Following his recovery and after sustaining another injury during training, MacDonald finally returned to action in April of this year, scoring a first round triangle choke submission over Ryan Jensen at UFC 129.

Belcher has been out of action for well over a year. Will he be tentative with his striking? Will he be overly protective or overly worried about his eye to the point that it keeps him from engaging?

It’s doubtful. That is not the Alan Belcher we have come to know. Then again, we are not the ones who almost went blind.

Belcher has the stand-up advantage, without a doubt. Belcher uses those tree trunks he calls legs and pounds them against flesh and bone like a battle axe. On the flip side, MacDonald is going to have the advantage in the submission game, but it is not going to be a huge advantage there.

Belcher has almost as many wins via submission as by knockout, and he only has one submission loss on his record. Kendall Grove choked him unconscious with a D’arce Choke back in 2007.

One of the best things about this match-up is both fighters’ finishing ratio. It is rare to see either MacDonald or Belcher go to a decision. The oddsmakers currently have the lines at -265 for Belcher and +220 for MacDonald. So, who ya got?