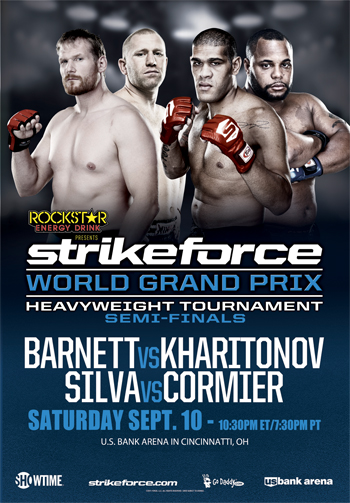 It seems as though it has been ages since the last round of the Strikeforce Heavyweight Grand Prix tournament back in June, but finally we have made it to the semifinal round set to take place this weekend in Cincinnati, Ohio.

The main event of this card will feature MMA veterans Josh Barnett and Sergei Kharitonov who both won in dominant fashion in their last outings. King Mo Lawal will be making his first appearance in the cage since losing his Strikeforce light heavyweight title over a year ago and Ronaldo “Jacare” Souza will defend his Strikeforce middleweight title against Luke Rockhold. Let’s get to the pertinent questions heading into this card.

Barnett was thought to be a top three heavyweight back in 2009 before he tested positive for steroids and basically put the Affliction promotion out of business because they had to cancel the event where he was going to fight Fedor Emelianenko. Barnett hasn’t lost since a unanimous decision loss to Antonio Rodrio Nogueira back in 2006. Barnett has won 7 fights since then, but none of those heavyweights have been relevant in the grand scheme of things. Kharitonov is probably a fringe top ten guy who hasn’t beaten anyone of note lately besides besting Alistair Overeem back in 2007. Thoughts?

I had Lawal as a fringe top ten light heavyweight before he lost to Rafael Cavalcante last year. He has been out of action since that fight healing up from knee surgery and honing his skills at American Kickboxing Academy. This is only Gracie’s fifth MMA fight, but he’s heavily decorated in the grappling world whereas Lawal has 8 MMA fights. Lawal is also a heavily decorated wrestler. So this bout kind of a throwback bout in a sense in grappler versus wrestler. Lawal is a underrated student of the game, but I think he’s cocky enough to take Gracie down to try and prove that he can avoid being submitted as well. If Gracie is able to best Lawal it will most likely be via submission. What are the chances of that happening?

Daniel Cormier put on his best performance to date in besting MMA veteran Jeff Monson back in June. However, he’ll be facing a totally different animal in Antonio Silva this weekend. Cormier showed vastly improved striking skills in his last matchup and of course he has a heavily decorated wrestling background. He’ll be giving up a ton of size and reach against Silva and Silva is coming off of his dominant win over Fedor Emelianenko back in February. We’ll will learn a great deal about both fighters in this fight because Cormier is superior in the wrestling and cardio departments wheras Silva has better jiu-jitsu and big power in his strikes. Of course a fighter’s performance dictates where he is ranked, but would the way Cormier won this fight influence where you would rank him as a fighter(if he wins). Would a dominant win over Silva or stoppage win catapult him into your heavyweight top ten even though this is the first ranked opponent he has faced?

All of the above questions tie into this final one. Basically, these fighters are fighting for ‘value’ for lack of a better term. I want to hear from you guys on this one. This will be the first Strikeforce event since the UFC announced their deal with Fox. Of course there are fighters that will surely make the jump over to the UFC if(or should I say when) Strikeforce is no more. The UFC will need fighters to help fill out all of their future cards on FOX, FX, and on PPV. Which fighters are fighting for the UFC futures on this card? If those fighters lose on this card would they be able to make the jump over to the UFC?

Be sure to check back as I’ll be posting up fight previews later this week!