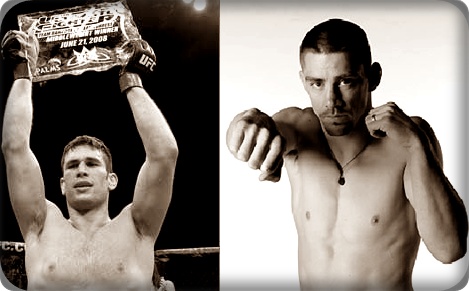 The UFC Live: Hardy vs. Lytle event will feature some good fights and we’ll start our preview of the event by taking a look at the welterweight matchup between Amir Sadollah and Duane Ludwig. It’s a bout that should be a fun affair but has no real bearing on the welterweight division at this time. Let’s get it:

Amir Sadollah comes into this fight with an career record of (5-2) with 2 wins via submission and 3 decision wins to his credit. He has won his last two fights after losing a decision to Dong Hyun Kim in May of last year. Sadollah has good muay thai and a background in sambo and jiu-jistu. However, he usually has problems with fighters that bring a good wrestlers that like to play the top control game.

Duane Ludwig comes into this fight with a career record of (20-11) with 10 wins via TKO/KO. Ludwig has an extensive muay thai background competing at a fairly high level before beginning his MMA career. He won his last fight via split decision after rebounding from a pretty severe ankle injury. Ludwig has improved his submission game over the years, but that is still the weakest part of his game as he has been submitted in almost half of his losses. He’s also been stopped via TKO/KO in 5 MMA bouts as well.

In thinking about this fight it occured to me that Sadollah should be the bigger fighter as Ludwig has spent a great portion of his career as a lightweight. Ludwig will want to keep this fight on the feet and as I mentioned Sadollah usually has problems with wrestlers, so stylistically Sadollah should have the edge since he is the more well rounded fighter and the larger fighter. While Ludwig is versed in submissions, I think Sadollah has the edge there and will take the fight to the ground should Ludwig get the better of him during the exchanges standing. Sadollah will likely close the distance and use his size to put Ludwig against the cage and then work for the takedown. He can work for a submission from there or control Ludwig from the top. If he decides to keep the fight standing, he’ll probably give Ludwig a steady diet of legkicks.

It should be a good scrap, but I think Sadollah will win this one via submission or decision.