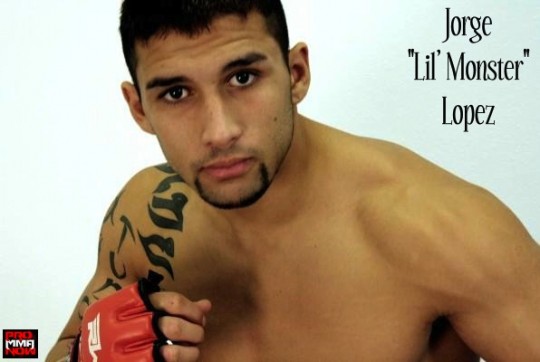 A lot of young boys and girls love to visit places like Disneyland for their Summer vacation. When Wand Fight Team member Jorge Lopez (10-1) was 14, he spent his vacation training with the legendary Chute Boxe Academy in Brazil.

Now, some eight years later, the 22-year-old Wanderlei Silva protege will put his near perfect record on the line when he faces fellow welterweight David Marshall (8-2) Friday night at Tachi Palace Fights 10 in Lemoore, Calif.

ProMMAnow.com (www.prommanow.com) spoke with “Lil’ Monster” this week about the upcoming bout and how he felt about Marshall replacing his originally scheduled opponent, Andre Galvao. We also talked with Lopez about his relationship with “The Axe Murderer” and what his long term goals are in the sport.

PRO MMA NOW: Thank you for speaking with us here at ProMMAnow.com, Jorge. How are you feeling physically now just a couple days away from your fight?

PRO MMA NOW: Now, you were originally supposed to fight Andre Galvao, but just a couple of weeks ago he was forced to pull out with an injury. How did the change of opponents affect your training and your mindset going into this fight?

JORGE LOPEZ: I was really excited to have the opportunity to fight such a big name and high level athlete but unfortunately injuries happen. Only difference I see between the two is height, so I would say the only thing that changed was the angle of which I will be having to punch. They’re both really good BJJ athletes so in that department I’ve been training extra hard and improving my ground game with the help of Team PIT Elevated in Utah. Court McGee, Ramsey Nijem and Coach Jason have really been a lot of help.

PRO MMA NOW: Obviously, Galvao is a pretty big name, how disappointed were you that he pulled out?

JORGE LOPEZ: I was disappointed but David Marshall is also a good name. He’s a Strikeforce vet with a good record so it’s just another step up the never ending stair case. At the end of the day it’s about fighting and winning no matter who it is.

PRO MMA NOW: How much did you know about David Marshall before this fight and how do you see yourself matching up with him?

JORGE LOPEZ: I had never heard of him. I feel I match up well against him. My superior wrestling skills will be my biggest strength against David.

JORGE LOPEZ: I am 22-years-old and I started Training in Ogden, Utah at the age of 14. I first got into wrestling in junior high and it happened to be that one of my teammates’ fathers owned a small BJJ gym in the same city. He invited me to come try it out, I fell in love after my first class.

PRO MMA NOW: Can you talk a little about your relationship with Wanderlei Silva; how has he helped you and what has he meant to you as a mentor over the years?

JORGE LOPEZ: Wanderlei was my first true super hero. I considered him a super hero because he was real. Not a fictional character but an actual human with superman ass-kicking ability. He is a true mentor and teacher of the sport so I listen and take every advice he gives me to heart. He has thought me to be patient and smart. Teaching me to avoid the mistakes he made as a young athlete. Avoiding injuries and unnecessary damage.

PRO MMA NOW: I had read that you traveled to Brazil to train with Chute Boxe for six months. Can you talk a little about that experience; when was that and what was that like?

JORGE LOPEZ: I traveled to Curitiba, Brazil when I was 14 for a training experience as well as a vacation with my father. A two week vacation which turned into a half a year of training. It was amazing, all the knowledge I acquired in that short time has made the difference between a .500 record and an almost perfect one. A fighter has to be smart and take care of his body and mind. It’s not just a tough man competition. We are professional athletes.

PRO MMA NOW: You were also a two-time Utah state champion wrestler. Can you talk a little about that and did you consider going on to wrestle in college?

JORGE LOPEZ: Wrestling taught me discipline and self restraint. It taught me a lot about myself and my limits. If it wasn’t for wrestling I wouldn’t have chose this career. It was the highlight of my high school years alongside with football. I considered wrestling in college but at the time my first love was still football. I was forced to make a decision after graduation, play football or wrestle and I chose football. In hindsight I don’t think it was the best choice but everything happens for a reason. No regrets here, Im glad I got to play and I won’t look back and ask myself, “What if?”

PRO MMA NOW: Well, you are currently on a nine fight win streak. What are Jorge Lopez’s long-term goals in this sport and how long before we see you in Strikeforce or the UFC?

JORGE LOPEZ: Long term goals are to make enough money In this sport to buy a house, a couple cars and maybe open a small business to live the rest of my life comfortably. I realize the window of success in this sport is small and I don’t plan on ever making Mayweather money in a fight so I have to play it as conservative as possible. Who knows, maybe one day we can see that sort of money, that would be great. But as corny as it may sound, money isn’t where you find happiness. I would love to fight for the UFC tomorrow if I got the opportunity. Only the best are allowed in and I want to be THE best.

PRO MMA NOW: Thanks for your time Jorge. Best of luck this weekend. Do you have any sponsors or anyone else you would like to thank?

Fight fans can watch Jorge in action at “Tachi Palace Fights 10: Let the Chips Fall” on Friday, Aug. 5, at Tachi Palace Hotel and Casino in Lemoore, Calif. For ticket info check out www.etix.com. The fights will stream LIVE Friday night on Sherdog.com.