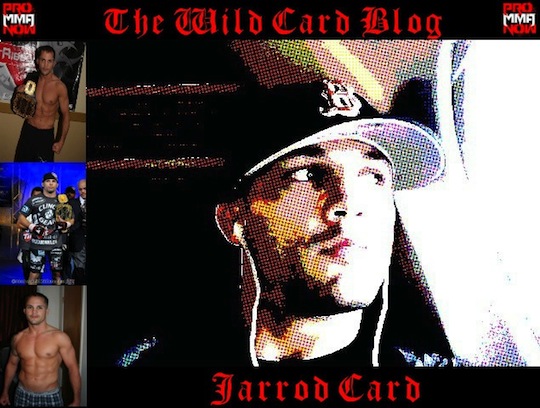 I have to say this last month was a pretty busy month for my training, I was faced with doing a test cut to 135. This by far was the biggest weight cut that I have had to pull so far. I knew in order to stay competitive I would have to start making the cut.

I have had a lot of fights throughout my career with 19 pro MMA fights, compiling a record of 13-5-1, and the best part is I was working 40 hours a week, at night going to college full time, and raising my son.

My last month of training took me out to the West Coast of California, to a gym called All in MMA, with the instructor name Master Cha. I knew of this gym, because I came out to All in MMA to train before my Jason Woods fight live on HDNet.

Out at All in MMA I was doing three-a-day workouts. One of these workouts involved me doing cardio pad drills with Master Cha. We knew that I would not get this over night but the drills came natural to me and I started to pick up the combos pretty quick in training.

While at All in MMA, I can say it took me to a new level of confidence. I was shedding the weight and felt like my body was peaking while at the lighter weight class.

I can say the training and the diet provided by George Lockhart was amazing. This was the first time I woke up the morning of weigh-ins at 138 pounds.

I only had to sauna off about two pounds, knowing I would be able to spit out that extra pound or float off the pound from a nap.

After the test cut, I rehydrated and put almost 15 pounds back on my frame, feeling the strongest I have ever felt after a weight cut.

This time in California opened up my eyes to the fact I need to train more and train harder. I am in talks right now to get back to California but looking to stop along the way at my old training partner Brian Stann‘s new gym in Atlanta, Georgia.

I would not mind spending some time at Greg Jackson’s gym also. Let’s see what these next few weeks hold for Wildcard MMA.

“The Wild Card Blog” by former XFC Featherweight Champion Jarrod Card is an ongoing weekly blog here at ProMMAnow.com that publishes each Thursday and will give readers an inside look into the life of a professional MMA fighter. It is part of our ongoing series of exclusive content written by individuals involved in the mixed martial arts industry.