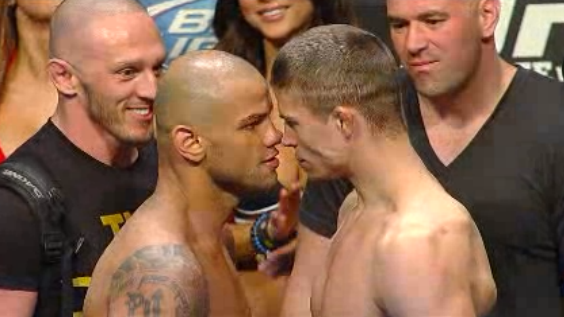 Rick Story picked up the biggest win of his career at UFC 130 with a decision victory over Thiago Alves. Now, he will have another chance to knock off a top-ten opponent. Due to an injury to Anthony Johnson, Story will fill in against Nate Marquardt at UFC Live 4.

The injury to Johnson is currently undisclosed. The card takes place June 26 at the Consol Energy Arena in Pittsburgh. The main card of UFC Live 4, also known as UFC on Versus 4, will air live on the Versus network.

Story dropped his UFC debut to John Hathaway back at UFC 99. However, since then, he has won six-straight fights. Prior to defeating Alves at UFC 130, Story had bested Johny Hendricks and Dustin Hazelett.

After a long middleweight run in the UFC, Marquardt is moving down to the welterweight division. Since debutting in 2005, Marquardt has defeated Demian Maia, Martin Kampmann and Jeremy Horn. At UFC 73, he challenged Anderson Silva for the middleweight title, but the champion finished the fight in the first round.