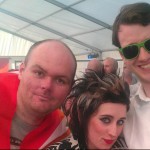 The group’s Head of Business Development Liam Fisher is excited about the fight. “I think stylistically Ninja and Tom is a great fight. It has every potential to be one of those great five round slug fests. Ninja had been on our radar for awhile and it had just been a case of getting the right match together. Ninja can really challenge Tom and bring the best out in him”.

For Watson it’s an attempt to test himself against a veteran of the world scene, something that Fish believes is crucial for his future development.

“Tom is one of the best middleweights in the country, an incredible fighter. We wanted to start to challenge him by matching him up with top quality international fighters. That’s what he wants and deserves”.

Indeed matching up the best of British against international veterans is a key part of BAMMA’s matchmaking philosophy. To Fisher it’s a case of giving the fans and the fighters what they want.

It’s therefore no surprise that the co-main event of BAMMA 6 sees another veteran take on a young home fighter, with the former UFC welterweight title challenger Frank Trigg taking on Welshman John Phillips.

“We wanted to match up Phillips with a world class opponent. Frank is a great fighter who has shown a lot of interest in BAMMA. Frank is a colourful character. Of the top ten trash talking moments in MMA he could appear in half of them. It’s going to be a great fight and a great appearance by Frank in the UK”.

A similarly colourful American was due to make the flight over to the UK, but sadly, injury stopped Phil Baroni taking on Matt Ewin, who instead faces former Team Punishment member and UFC veteran Ivan Salaverry.

“Phil had an issue with his wrist from his fight in March and the doctor wouldn’t allow him to fight. Phil was really keen to fight Matt, it was heating up nicely between those online. Phil still wants to fight and we’re talking about dates at the moment”.

The use of such veterans has one eye on the lucrative foreign market. Fisher is adamant that the UK is not the limit for BAMMA.

“We never set out to be just a British promotion. With the recent Strikeforce buyout, there’s a real chance for us to position ourselves as one of the alternatives to the UFC. As we try to expose the brand in America, Frank Trigg is one of those guys that has a name that attracts people. We have our online portal that we’ll be we’ll be going live on that as usual so international fans can follow the action. We’re also talking to television companies in America, Europe and Asia about television deals in several countries”.

An early sign of these ambitions is the promotion securing the services of HDNET’s lead commentator Michael Schiavello and the event being broadcast live on Canada’s Fight Network.

Additionally all the event’s prelim fights can be watched worldwide on BAMMA TV (www.bamma.tv), with several being streamed live including a free showing on Facebook of Scott Jansen vs. Craig Chesters at 6.30pm BST/ 1.30PM ET.

The remainder will be available on BAMMA.TV (www.bamma.tv) on Wednesday, May 25th.

For Liam Fisher, BAMMA is only going to go from strength to strength, with Saturday’s show promising excitement from top to bottom.

“We want to do big things. We want to put a line in the sand. If you look at these guys and their styles every fight on BAMMA 6 is really interesting. I can’t see anything that will be boring to watch!”

BAMMA 6 takes place on Saturday, May 21st  from London’s Wembley Arena and will broadcast live in the UK on SyFy, in Canada on Fight Network and worldwide on www.bamma.tv at 9pm BST/4pm ET.

Prelins will be shown live worldwide on www.bamma.tv from 6.30PM BST/1.30PM ET. For more information, including how to buy tickets, visit www.bamma.net. You can follow Liam on Twitter @LiamBAMMA.