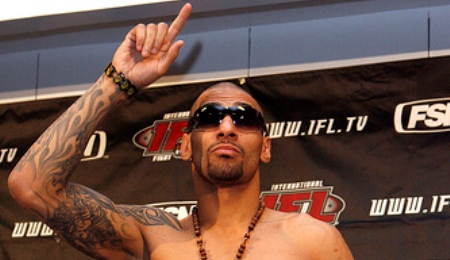 Last week, Mann Talk was lost. Sure there was the M-1 Challenge show and a great UFC card, but without a Saturday night shot of Bellator, something felt seriously off. This weekend, the promotion returns with a solid card. It will feature the finals of the season’s welterweight tournament and the promotional debut of a former WEC champion.

Welterweight Tournament Final
Rick Hawn vs. Jay Hieron
Hawn has the type of throws that people expect when they hear the words “world-class judo.” However, he has not faced a strong wrestler and has a tendency to strike a little bit too much. Both of these factors will be at play here. Look for Hieron to use his wrestling game to stay on his feet. Even if Hawn is able to throw him, Hieron should be able to get back to his feet. Despite showing some holes in his striking game against Brent Weedman, Hieron is still a strong counter puncher. He should have enough game to score against Hawn.
Pick =Jay Hieron
Film Study: Jay Hieron vs. Mark Miller

Bryan Baker vs. Joe Riggs
I see a lot of similarities between these two fighters. For years, I had heard about Riggs was the next big thing after coaches saw what he could do in the gym. For a myriad of reasons, things never came together for Riggs. Baker is an extremely gifted athlete, but he has not really been able to put it together either. I favor Baker, because I think he can get takedowns and make Riggs work off his back. However, on the feet, Baker is still very robotic, and Riggs might be able to capitalize.
Pick = Bryan Baker
Film Study: Bryan Baker vs. Rory Singer (Kenny Rice Alert)

Neil Grove vs. Zak Jensen
Grove is always a bit of a wildcard. On one hand, he is a solid striker who can lace respectable opponents, but he is still a major liability on the ground. Jensen is not a high caliber fight and would probably struggle to pull off a submission on anyone. On the feet, this is a mismatch and at some point Grove will put hands on his opponent and end the fight.
Pick = Neil Grove
Film Study: Neil Grove vs. James Thompson

Chase Beebe vs. Jose Vega
It is hard to believe that three years ago Beebe was the WEC bantamweight champion. It feels more like 10 years ago. He dropped the belt to Miguel Torres and lost five-straight fights. However, since then, he is 5-1. Vega is certainly better on the feet, but if Beebe can get takedowns he should be able to avoid submissions. It will be a huge comeback story if he is able to pick up his first win on a major league show since 2007. However, considering the Mike Easton decision, it is entirely possible that Beebe did something in a previous life and has terrible karma.
Pick = Chase Beebe
Film Study: Chase Beebe vs. Steven Kinnison