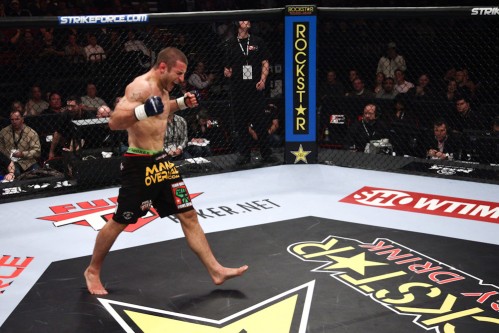 Multiple media sources have been able to confirm that Strikeforce has is angling towards a welterweight match up between Evagelista “Cyborg” Santos and Tarec Saffiedine. The fight is expected to be part of an unannounced card in July.

Rumors swirled that the two would fight on Strikeforce’s March 5 show, but the contest never materialized.

After defeating Dream welterweight champion Marius Zaromskis in his welterweight debut, “Cyborg” earned a shot at Nick Diaz‘s Strikeforce welterweight title. In the title fight, he seemed to have an early advantage due to his leg kicks. However, late in the second round, he took down the champion and quickly tapped out to an armbar. Over the course of his career, Santos has also scored wins over Olympic gold medalist Makoto Takimoto and WBO cruiserweight champion Yosuke Nishijima.

Saffiedine moved to Team Quest in 2008 to round out his MMA game. He won his first two Strikeforce bouts over James Terry and Nate Moore. In his last fight, the “Sponge” faced off against Tyron Woodley in a battle of top-welterweight prospects. After three rounds, Woodley walked out of the cage with the unanimous-decision victory.

2 thoughts on “Strikeforce working to put together ‘Cyborg’-Saffiedine again”