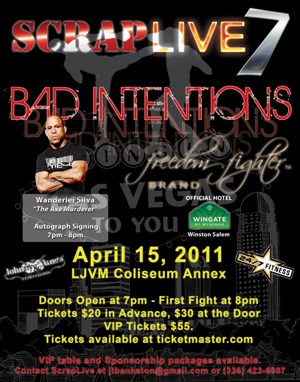 As we reported last month, Scrap Live will be back in Winston Salem, NC, on April 15th with its seventh installment in the Scrap Live series. The event will take place at the LJVM coliseum annex with the doors opening at 7pm ET, fights beginning at 8pm ET.

You can get your tickets right here.

Also in attendance will be MMA legend and current UFC middleweight Wanderlei “The Axe Murderer” Silva. Silva will be the special guest, doing a autograph signing from 7pm-8pm. If you want to meet one of the most legendary MMA fighters of all time, this is your chance to do so! Silva will be fighting at UFC 132 in July against Chris Leben.

Weigh-in’s will be  April 14th at Johnny and Junes on Silas Creek Parkway in Winston-Salem at 7pm. The updated fight card thus far is below: