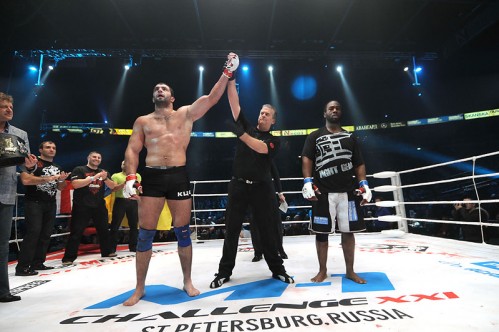 Sherdog has reported that M-1 Global’s heavyweight champion and top-prospect Guram Gugenishvili has his next opponent. He will defend his title against Pat Bennett at M-1 Challenge 26. The event is currently scheduled for July 8, and the main card will air live on Showtime.

The Ukrainian-Georgian heavyweight won the title with a second-round submission victory over American Kenny Garner at M-1 Challenge 21. In his last fight, he successfully defend the belt with a win over Maxim Grishin. At 6′ 5″ and with an undefeated 11-0 record, Gugenishvili is considered a legitimate prospect in the heavyweight division.

Bennett was the runner up to Garner in the M-1 Selection 2010 Americas tournament. He has since rebounded with a decision victory over Alexander Volkov at M-1 Challenge 22. At first the judges awarded Volkov the decision, but then the promotion overturned the decision and awarded Bennett the victory. Bennett was a NCAA Division III All-American for SUNY Brockport.

In the headliner of M-1 Challenge 26, lightweight champion Jose Figueroa will defend his title against Germany’s Daniel Weichel.