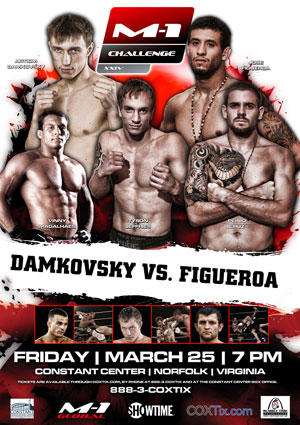 Tonight, M-1 Global takes center stage on Showtime. For years, the promotion has been “copromoting” with Strikeforce, but now they have their own time slot for M-1 Challenge 24. The main card will broadcast live at 11 p.m. ET and features middleweight title fight, a lightweight title fight and one of the best grapplers on the planet.

Alexander Sarnavskiy vs. Beau Baker
Round 1 – Sarnavskiy starts things off with a liver kick, and Baker quickly clinches him up against the ropes. He struggles to get the takedown, and the fighters trade needs. Sarnavskiy gets a little bit of space an unloads a series of hooks and a flying knee. Baker is in trouble and desperate for a takedown. The Russian fighter stays on the outside, but slows his pace. Baker shoots for a single leg, but he can’t finish it. Sarnavskiy lands a nasty knee and a pair of nice uppercuts from the thai clinch. The “Tiger” is unloading a series of hooks whenever Baker tries to close the distance. Strong first round for Sarnavskiy. He takes it 10-9 on the ProMMANow card.

Round 2 – The Russian fires a flying knee to start the round. Baker pushes his opponent into a corner. He is able to get a body lock, but Sarnavskiy catches his balance on the way down and stays on his feet. He creates distance and lands a series of knees. He then puts Baker in the corner and rocks him with an upper cut. Baker tries to a trip single, but slips. In a scramble Sarnavskiy jumps on his back standing. Baker tries to escape, but Sarnavskiy finishes it with a rear-naked choke. 2:32

Jason Norwood vs. Mojo Horne
Round 1 – Norwood eats kick to get a slam takedown. Horne tries a guillotine, but Norwood is already passed into side control. He is heavy in the position and throws a few knees to the body. Horne is able to pop his hip up and get back to a half guard position. He then is able to scramble back to his feet, but Norwood slams him down into north-south position. Horne threatens with an inverted triangle, but Norwood escapes after a few moments. He ends up back in side control and steadily works punches to the face. Horne gets to his knees, but eats a few knees to the body. Norwood picks his opponent up with a high crotch and slams him down hard. He throws some punches to the body to end the round. Easy 10-9 round for Norwood on my card.

Round 2 – On the feet, Horne starts off his with some nice hooks. Norwood goes for the shot again and eats a very nasty knee to the body. He continues to chain his wrestling and finishes the takedown. Horne gets backs to his feet from half guard. They clinch and Horne lands some knees. However, Norwood gets a single and puts Horne down hard yet again. From his opponents half guard, Norwood lands some hard punches and tries to frame up a Kimura lock. The referee brings them up to their feet for basically no reason. Horne starts to throw wildly, but that only lets Norwood finish the takedown easily. Norwood stands over his opponent and eats several up kicks to the body and head. He jumps back on top and passes to side control with 10 seconds left in the round. Norwood is less dominate, but still does more than enough to take the round 10-9.

Round 3 – Norwood catches a kick and takes the fight right back to the ground. Both fighters get stuck in the corner and can’t work. The referee stands them up again. Obviously, Norwood takes his opponent right back down and works back to side control. After some punches to the body, Norwood takes the mount, but he can’t posture up. Horne gets back to half guard and the crowd boos loudly. Norwood moves back to mount, but is still not doing very much damage. He unleashes at the clapper. Norwood better take this fight 30-27 or there will be trouble.

Vinny Magalhaes vs. Jake Doerr
Round 1 – The fighters trade punches in the center of the ring. Somehow Magalhaes drops his opponent and jumps on top. Doerr gets back to full guard, but only for a moment. Magalhaes passes to side control and then back into half guard, but then right into full mount. Doerr takes the back with ease. He then locks in a body triangle. He starts throwing lefts and rights from the back and the referee stops the bout. It was a bit of a quick stoppage, but Doerr was not escaping the back mount.
1:47
OFFICIAL RESULT: Vinny Magalhaes defeats Jake Doerr TKO (punches) 1:47 Round 1

Round 2 – Jefferies works his way in with some punches and goes for a clinch takedown. Sultanakhmedov keeps his balance and breaks free. Jefferies clinches up yet again and this time he gets it. He immediately transitions to the mount and looks to work with an arm-triangle choke. Sultanakhmedov hip escapes all the way back to his feet. The kicks are coming really hard now. The Russian gets the thai clinch and lands several hard knees. They separate and Sultanakhmedov lands a bunch of straight punches. A head kick comes next. He then lands a series of knees and Jefferies drops. This fight is over. Sultanakhmedov is crowned champion.
3 07
OFFICIAL RESULT: Magomed Sultanakmedov defeats Tyson Jefferies TKO (knees) 3:07 Round 2

M-1 Challenge Lightweight Championship
Artiom Damkovsky vs. Jose Figueroa
Round 1 – Leg kick and right hook land for Damkovsky. Figueroa is the taller fighter, but Damkovsky has a serious speed advantage. He stuffs a takedown from the jiu-jitsu fighter and lands a nice knee. Damkovsky is scoring well with leg kicks when Figueroa comes forward. Figueroa gets a takedown, but Damkovsky is able to get to turtle position. He gets back up and lands another knee. Figueroa lands a hard body kick of his own. Damkovsky continues to come forward with leg kicks and flying knee. He is brutalizing the lead leg of Figueroa, inside and out. Damkovsky catches a head kick against the ropes. Figueroa gets a takedown and takes the back. Damkovsky is able to turn and get into half guard and then full guard. The Floridian postures up and lands some nice straight punches from the top. Close round. Figueroa takes it at the end with a takedown and ground and pount 10-9.

Round 2 – Hard straight right lands for Damkovsky. Figueroa jumps at his opponent and has his legs kicked out. He catches a kick from Damkovsky and gets a nice takedown. From the gurad he picks up where he left off last round. His size advantage is more evident on top. He passes to side control and then moves to the mount. Damkovsky gives up his back and stands. Figueroa counters with a body triangle and then moves back to mount. The ground and pound is coming down hard. The referee stops the fight and Damkovsky’s corner is not happy.