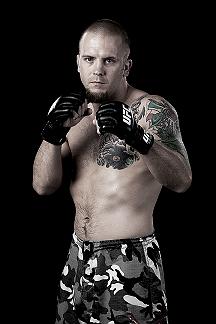 UFC middleweight Rob Kimmons (23-6) still plans to drop down to welterweight at some point, but before he can think about that, Kimmons has to get ready for a March 3 bout against Korean prospect Dongi Yang at UFC on Versus 3 in Louisville, Ky.

Now 3-3 in the UFC, Kimmons is coming off of a second round submission loss to Kyle Noke at UFC 122. With the cutbacks the UFC has been making since the merger with the WEC, you could argue that Kimmons has a lot riding on the outcome.

However, he’s more at ease and confident than he’s ever been before a UFC fight. Part of that has to do with his intense and thorough preparation for Yang, while the rest likely comes from experience.

“I would say I was more nervous before the [Noke] fight,” Kimmons told ProMMAnow.com. “Me and Jorge Rivera talked backstage at that last fight … He gave me good advice and it kind of put things in perspective, and I really don’t feel like I have as much pressure on me. If anything, [Yang] has more pressure. He was coming in as a UFC undefeated, lost his first fight; If you’re 0-2 in the UFC, you’re pretty much cut always.

“Worst case scenario, I lose the fight and then I get cut, there’s other things for me,” he said. “The UFC’s been my dream my whole life and I don’t want to go anywhere else, but if I have to I will and then I’ll go to 70.”

Kimmons added, “Also, to be honest — and hopefully this is a good thing — it doesn’t almost even seem like I’m fighting in a week. I’ve prepared so well for this fight; I don’t remember being this not nervous. And I’m not overlooking the guy or anything; I’m just real calm about it.”

Yang’s UFC debut came against The Ultimate Fighter 11 cast member Chris Camozzi at UFC 121. Camozzi came out on top via split decision, but it gave Kimmons plenty of information about his opponent.

“I watched that fight about six times and I broke it down,” Kimmons said. “I noticed he likes to throw wild punches. He looks like he’s got power, but he doesn’t even twist into his punches. He throws arm punches.”

Although Kimmons actually thinks Yang did enough to get the win over Camozzi, he’s confident that his style will give Yang quite a few more problems. Unlike Camozzi, who is a tall, lanky fighter, Kimmons prefers to come forward and press the action.

“To be completely honest, I judge a lot of fights for the Kansas Athletic Commission, and I would’ve given that fight to him,” he said. “But the things that he did against Chris Camozzi, he’s not going to be able to do to me. We’re completely different fighters and have different builds. [Camozzi] throws a lot of leg kicks, which opened up the takedowns for Dongi. The things that Dongi did well in that fight, I don’t see him being able to do against me. If he wants to [brawl], then I’m all for it.”

In some ways, Kimmons and Yang have similar builds and fighting styles. Both come in just under six feet tall — shorter than a number of other middleweights in the UFC — and like to come out aggressive. However, Yang doesn’t have anywhere near the experience of Kimmons, either overall or in the UFC. That, Kimmons said, makes a big difference.

“A bunch of people told me before I even got to scout this guy, they said, “This guy’s kind of a mirror of you,’” Kimmons said. “Obviously he’s buffer than me, but he’s got the same body style — wide shoulders, not real tall and lanky. He even fights similar to the way I fought when I started out. That’s the main difference, though, is the seven extra years I have as opposed to him.”

Not only does Yang have a good amount of power, if not a ton of technique, but he also has a Judo black belt. Kimmons’s training camp has focused on dealing with both issues.

Of course, he doesn’t want to get stuck in a clinching contest. But Kimmons striking has to account for an opponent that probably won’t use the same standard footwork and combos shown by more experienced and polished fighters.

“Instead of just going to Grindhouse and one other gym, this camp I went to Sixty-Eights, American Jiu Jitsu, and Fight University on a regular basis,” Kimmons said. By mixing things up, Kimmons has worked with a number of Judo instructors and practitioners.

“I got a huge pool of fighters to train with, a lot of young, talented guys that aren’t there yet, but really good wrestlers,” he said. “And any time I go against a new guy, they always go 110 percent because I’m the only UFC guy around here, and everyone wants to see where they’re at against me.

Kimmons has also reviewed a couple of Yang’s fights from before his UFC debut.

“In both those fights, he’s coming out straight like a bull and those guys back up,” he said. “I don’t do that. I come right at a guy. The way I train, I train differently than a lot of people at the big camps. I do a lot of fighting. We spar a lot and we go hard.”

Although Kimmons didn’t want to give away much of his game plan for countering Yang’s Judo, he didn’t mince words about how he expects to win.

At the same time, Kimmons also wants to stick to the strategy he has laid out for Yang instead of fighting on emotion. He let his emotions get the best of him against Noke and it cost him.

“I put my elbows up to start throwing hooks, which gave up the body lock,” Kimmons said of the Noke bout. “I’m not really worried about that as much because I drilled the sh*t out of that. I’m more concerned with making sure I’m controlling my head in this fight and not letting my emotions take over. When I’m fighting in there and strategizing and setting things up, I’m so much better than when I’m caught up on emotion.”

Kimmons added, “Nothing against Chris Camozzi, but he’s by far the best guy Dongi Yang has ever fought, and I’ve fought way better people than that. I just feel like he’s never fought the competition that I’ve fought. I think that I’m going to take him out to the deep waters and he’s not going to be able to swim.”

Kimmons asked to thank all of his coaches and training partners, including Vlad P., Nick Nolte (the guy fighting Phil Baroni at TFC, not the actor), everyone at Grindhouse, James Krause, Aaron Derrow, and Eric Marriott, etc.

1 thought on “UFC on Versus 3 Exclusive: Rob Kimmons confident his experience will get him past Dongi Yang”