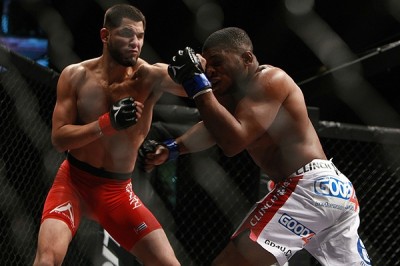 On March 5, he’ll make his first appearance with the promotion since signing a multi-fight deal against Billy Evangelista in Columbus, Ohio. Masvidal had one prior fight under the Strikeforce banner in 2007, defeating Matt Lee, before successful stints with Sengoku and Bellator.

Although he’s accomplished plenty in MMA, including wins over Satoru Kitaoka, Yves Edwards, and Joe Lauzon, Masvidal first rose to prominence thanks to some street fights of his that popped up on Youtube. One fight against Kimbo Slice protege “Ray” has garnered approximately 750,000 views.

“I just got lucky those two got recorded and gave me a lot of popularity,” said Masvidal, who got into plenty of other scraps in his younger years. “Whenever I get recognized, it’s usually by those fights.”

But now, the fighter nicknamed “Gamebred” is well-known as one of the top prospects in the 155-pound division. We had a lot to talk about, from his big win in Bodog over Edwards, to his controversial loss to an overweight Paul Daley, and whether he would fight ATT teammate Gesias “JZ” Cavalcante if it came to that. The Q&A from our exclusive conversation is below.

ProMMAnow.com: First off, when did you transition into more formal MMA training?

ProMMAnow.com: Even early on in your career, you faced some pretty tough competition, including UFC vets like Roli Delgado, Brian Geraghty, and Joe Lauzon. Did you feel pretty comfortable matching up against tougher guys at that stage?

Masvidal: Yeah, I didn’t care. My first fight against Brandon Bledsoe, that guy had a lot of fights. I’ve always just felt confident. As long as the other guy breathes and bleeds blood, let’s do it.

ProMMAnow.com: The win that really put you on the map with a lot of MMA fans was your victory over Yves Edwards under the BodogFight promotion. Talk about that fight and what it did for your career.

Masvidal: When I first strated training, I remembered seeing Yves Edwards vs. Aaron Riley in Hook N’ Shoot. I thought, wow this is awesome. Then a couple years I’m fighting him. When they offered that fight, I was like, ‘Hell yeah.’ That was one of the fights I was probably most excited for. Obviously he’d been in the UFC and knocked a bunch of guys out. I was really excited to fight Yves and make a big statement.

ProMMAnow.com: Your most recent fight had a lot of controversy. It was against Paul Daley for Shark Fights. I know a lot of people didn’t agree with him getting the decision, and on top of that, he missed the 170-pound weight limit considerably and you were moving up from lightweight. Give us your thoughts on that match.

Masvidal: I’ve left the gym at a certain weight and that scale was different and I get to the scale and I’m like half a pound off … but I run it off and did whatever I had to do. But when he offered me the money I was like, all right, cool. Weights weight, I’m going to kick your butt regardless.

I knew I did enough to beat him. On the feet, he just wasn’t landing anything. He has big power and 20 pounds on me come fight night. If he would’ve hit me with anything clean, I would’ve been hurt.

He was missing, I was moving my head, landing my jabs. I know I wasn’t hurting him … but I was outpointing him.

I counter-fight and that’s what comes most naturally to me, but MMA judges and fans don’t really go for that. They just want the guys coming forward throwing bombs whether they land or not.

On top of all that, I was landing takedowns. He may have won the third because he stole it. When they gave the decision, I was in awe. But it’s happened to me before.

ProMMAnow.com: I’m sure you had plenty of options, so what led you to sign with Strikeforce?

Masvidal: The ultimate decision at the end of the day was the money (laughs). They put the better deal on the table. Plus, I can fight for them and I can fight overseas in Japan where I like to fight anyway.

ProMMAnow.com: Speaking of that, MMA in Japan is struggling right now, with DREAM and Sengoku having a hard time. As a fighter, what would it mean to you if there wasn’t a big organization over there holding shows?

Masvidal: That would suck. I really like fighting in Japan. I love the food, I love the culture … On top of that, they got great fighters at lightweight and the lower weight classes. It would be a big letdown. I think it will pick up, though. At least when I’m over there, I don’t notice a decline. Almost every time I’ve fought there except once, the stadiums are packed.

Masvidal: I think it’s one of the deepest divisions in the world. There’s established guys, up-and-comers, and they have connections with the Japanese promotions.

ProMMAnow.com: The Strikeforce heavyweight tournament is off to a strong start, and there were rumors, according to ESPN.com, of a similar tournament in the lightweight division. Is that something that would interest you?

Masvidal: I think it’d be awesome. Maybe they’d do a Strikeforce vs. DREAM thing. Just throw everyone in a 16-man tourney or whatever. That would a true champion right there, whoever wins it. I’d be all for it.

ProMMAnow.com: The issue of guys fighting teammates comes up a lot, and a teammate of yours, JZ Cavalcante is also in the Strikeforce 155 division. If it came down to it, would you be willing to fight JZ?

Masvidal: Me and JZ train, if not every day, then every other day. I know a lot of people in the sport, but he’s a friend of mine, he’s my boy. Would we fight? Yeah, because we talked about it. If we were both going to get paid a good substantial amount of money, we’d put on a hell of a show. Those sparring sessions are pretty good.

So if they were going to pay us both good, good money and take care of us … JZ is a professional, so there wouldn’t be any beef after.

ProMMAnow.com: Now let’s discuss your fight coming up on March 5 against Billy Evangelista. He’s a tough guy that isn’t afraid to brawl and put on a show. Do you think he’s a good match-up for you?

Masvidal: I think so. Like I said earlier, I’m a natural counter puncher. I like people to come forward. I’m more about cutting my angles. I’ll hit him and make him look bad and just make him miss and hit him.

I’m hoping he comes forward. Because usually guys get in there, especially in the lightweight division where I got a lot of reach and size, they don’t want to come forward.

ProMMAnow.com: Strikeforce has shown they’re willing to match-up two guys from different weight classes if they’re both willing and there is enough interest. So even though you’re probably best at 155, would you be willing to take a rematch with Daley at 170 or take another big fight at welterweight?

I fought Paul before and I’ll fight him again. I’ll fight whoever they want me to fight next after Billy.

ProMMAnow.com: Jorge, thanks for the time. Are there any sponsors or training partners you’d like to thank?