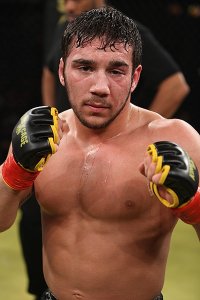 When King of the Cage held its “No Mercy” event on Sept. 17 with the HDNet cameras recording all of the action, most close followers of the sport were quite familiar with bantamweight champion Abel Cullum. But his opponent, Jimmie Rivera (8-1), probably didn’t carry the same name recognition.

After five rounds of action, that changed in a hurry. Rivera, a rising prospect from the Tiger Schulmann mixed martial arts academy, controlled most of the fight, getting the better of the stand-up exchanges and stifling Cullum’s takedown attempts.

“We exchanged a little bit, but I was landing more punches and getting my takedowns almost every round,” Rivera told ProMMAnow.com.

Although Rivera was confident he’d won the fight, the judges only gave it to him via split decision.

“He got one good punch in at the beginning of the fight,” Rivera said. “I’ve watched the fight over and over again to analyze it and perfect my techniques. I definitely gave him the first round, but from the second to fifth round, scoring it, I scored it for myself. So when I actually heard that it was a split decision, I was a little bit shocked. He went for numerous takedowns and didn’t get me down. It was a close fight. When it comes down to it, I thought I won, but when you leave it in the judges’ hands, you never know.”

Nevertheless, the close scoring didn’t damper the fact that Rivera had just won the biggest fight of his career. In his eight professional fight, he defeated a longtime KOTC champion and DREAM veteran. Not too shabby.

“There were no words in my mouth,” Rivera said of the moment he won the title. “I couldn’t believe what I trained so hard for I’d accomplished.”

Despite his relatively smaller number of professional bouts, it was a long time coming for Rivera, who began martial arts when he was nine years old.

“I was a young kid and my mom wanted me to get into a sport,” he said. “I tried football and it was cool. But then went to Tiger Shulman’s.

“Back in the day, before we changed to MMA, we [traditional martial arts], did wood breaking, stuff like that. Around 2000 it changed to MMA.”

After going 7-0 as an amateur, Rivera made his professional debut. He went 3-0 for the Ring of Combat promotion and also competed on two Bellator undercards.

Fighting for Bellator was a good experience in the biggest venues he had competed in to that point, but Rivera didn’t need those wins to know that he could compete against the best.

“I always thought I could compete with the higher level guys,” he said. “When I got the opportunity to fight Abel Cullum it was one of the best opportunities. I got to put my name on the map. It was a great win for me.”

The key for Rivera is preparation. When his training camp goes right, he doesn’t worry about who is standing across from him.

“You really don’t question yourself when you get in there if you train right,” Rivera said. “And I felt I trained right, I ate right … I was training for ten weeks straight, but actually took fight on four weeks notice [after another fight] fell through. Once the bell rings, those first punches come out, that nervousness goes away and you start working your game plan.”

In case there are any doubters, Rivera will make his second title defense in a rematch against Cullum on May 14. With any luck, he could use a win as a springboard to get into the UFC.

“I’m really actually excited to fight [Abel] again,” Rivera said. “I’ve been training harder this time. Last time I was working and training. This time I only have to worry about training.

“I’m just trying to stay focused and take it one fight at a time. King of the Cage is a really great venue. But my dream is of course to be in the UFC. That’s my goal.

“I saw Dominick Cruz recently, and I looked at him and thought, I could go toe-to-toe with this guy. He’s a really good fighter, but there’s no reason I can’t compete with those guys.”

Rivera asked to thank his sponsors, Tigear and In Motion Meals.