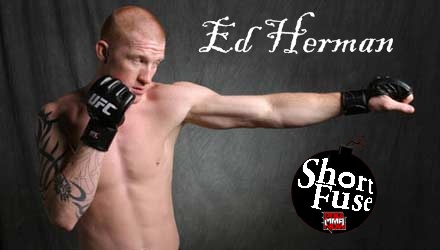 It was also June when Herman made his official UFC debut nearly five years ago, when he faced Kendall Grove in the finals of The Ultimate Fighter season three.

If it seems like it has been a long time since you have heard anything about Herman or seen him fight, that is because his last fight was actually in Aug. 2009. It was then he suffered a knee injury just seconds into the second round of his fight with Aaron Simpson at UFC 102.

Herman ended up having surgery, went through rehab, began training, re-injured the same knee and had to have surgery all over again on the same knee. Needless to say, it has been a rough one-and-a-half years for “Short Fuse”.

When it was announced last week that Herman would be making his return, I knew right away we needed to catch up with him to see his mindset, just to see how he has dealt with all the time off and how excited he is about returning to action.

PRO MMA NOW: Hi Ed, thanks for talking with us at ProMMAnow.com (www.prommanow.com). How are you doing and how does it feel to know you finally have a fight scheduled after being out so long?

ED HERMAN: It feels great. It’s been a long time coming.I’m excited to get back in the cage and make another run.

PRO MMA NOW: Your last fight was in Aug. 2009 at UFC 102 when you suffered a knee injury against Aaron Simpson. You had surgery, then you went through rehab, started training a little too soon and hurt the same knee again and ended up having to have surgery again. I can’t imagine how frustrating that must have been, can you talk a little about that and what this last year-and-a-half has been like?

ED HERMAN: It was frustrating, re-injuring it, more than frustrating. A lot goes through your head. You see guys go out with ACL injuries, it ends their careers in a lot of sports. It’s devastating at the time. But I’ve been lucky and blessed enough that the second surgery went really well and seems to be holding up and doing really well. Things are good. It shows you how fast you can lose everything in your career and stuff like that, with a bad injury. It was a little wake-up call.

PRO MMA NOW: So I guess you will make sure you are a 100% this time right?

ED HERMAN: Yeah for sure, yeah. I had never had a knee injury before going into that fight. It was like a freak thing that happened. So yeah for sure I took it nice and slow. It’s been a year now since my last surgery.

ED HERMAN: I feel like I’m pretty darn close to 100% yeah. As I get stronger into my training camp I’m sure I’ll get more confident as time goes by. So I think it’s just trusting that everything is okay, even though I think it is and all the doctors assure me that everything is good..

PRO MMA NOW: Now you came from The Ultimate Fighter season 3. Is it hard to believe they are on the 13th season of the show?

ED HERMAN: Yes and no, ya know. Yeah, 13th season, crazy, I’m fighting on the finale.

PRO MMA NOW: Do you still watch the show, and will you watch this season?

ED HERMAN: If I have time I’ll watch it. The last one I actually watched. I think it was the last one, it was pretty funny so it kept my attention. It just depends on how busy I am with training and stuff, I’ll try to catch an episode here and there. Last season was probably one of the ones I watched most in awhile.

PRO MMA NOW: What do you think being on The Ultimate Fighter did for your career?

ED HERMAN: I think it did a lot exposure-wise. UFC pretty much offered me a contract at the same time. They said you can go on the show or you can have a contract with us right now getting paid three and three ($3,000 to show, $3,000 to win). And I said, “How much do you get if you win the show?” And they said, you know, whatever it was, starting at 12 and 12 [$12,000] or 14 and 14 [$14,000] or something like that. So I was like, “I’m going to win the show. Put me on the show.” I saw a better opportunity taking the route through the show, making more money possibly, getting more exposure obviously is huge for being on the show. Several people know who I am who wouldn’t if I wasn’t on the show.

PRO MMA NOW: And, you came very close to winning.

ED HERMAN: Yeah I did. I was real close. Dammit.

PRO MMA NOW: You are scheduled to fight Tim Credeur on June 4. Do you like that as a first fight back or does it make any difference to you who it is?

PRO MMA NOW: Do you know much about Tim? How do you think you match up?

PRO MMA NOW: When do you think you will start your camp?

ED HERMAN: I’ve already started buddy. As soon as I know I got a fight I’m already training. Not necessarily like I’m training balls out, but I’m starting the process now, working with my strength and conditioning coach. He’s got a whole plan lined out for me from the beginning so you peak out right. So, I’m getting in work. It’s all training camp. I’m always training anyway. If I wasn’t injured I would have never stopped training. You know what I mean?

ED HERMAN: But the last eight weeks gets a little more intense. But like I said, I’m starting now. This is a huge fight for me.

PRO MMA NOW: You were with Team Quest but now you have moved up to Colorado, right?

ED HERMAN: Correct. Me and Ryan Schultz opened our own gym. It’s called Trials Martial Arts and Fitness. We’re at about 65 students after four-and-a-half months. Things are going good. We got a nice 5,000 square foot facility up here. Big open floor plan. It’s a nice gym man. We’re excited and our students are excited. We got a few amateur fighters that just recently competed. Our first guys out fighting so that was pretty cool.

PRO MMA NOW: I assume you will be having your camp there.

ED HERMAN: I’ll be having my camp here. I’m going to bring some guys out. And then I’ll be cross-training down at Grudge as much as I can too. Things are good man, a lot of good training out here. Good altitude.

PRO MMA NOW: You were with Team Quest a long time, how hard was it to leave?

ED HERMAN: It was pretty hard man. It was real hard, leaving all my teammates and all the guys I trained with throughout the years. One thing they had there was a lot of great training partners for a long time. We had a good room man, you can ask anybody that came out there and trained with us. It was hard but near the end a lot of guys were leaving and stuff and it just wasn’t the same as it used to be. I felt like I needed to make a move. And I wanted to set up something for my family in the future where I had my own gym.

PRO MMA NOW: That’s awesome. What’s the website address where people can check out the gym?

PRO MMA NOW: What is your opinion on the current state of the middleweight division and have you been keeping up with it, watching the fights?

ED HERMAN: Yeah, for sure. I think it’s wide open man. Anderson’s champ obviously and he kicks everybody’s ass but besides that it’s wide open. But he can be beat too and Chael showed that Anderson can be beat. He beat him, except for like the last thirty seconds he had a little problem there. I think it’s wide open. There’s a lot of talent, a lot of guys in there right now that I know I can compete with, if not all the guys right now. You know what I mean? After coming off an injury and being out so long I feel like it’s wide open for me. If I come in, win this fight, get that under my belt, I have a strong feeling I can make a run and do some real damage in the middleweight division this year. There’s been a lot of great fights and guys winning fights they weren’t supposed to and things like that.

PRO MMA NOW: Any idea how many fights you might be away from a shot?

ED HERMAN: Aw man, I gotta long… I gotta win four or five fights in a row, obviously. You know what I’m saying? And I’m not looking past Tim at all. I’m taking it one fight at a time. I’m just saying I think it’s wide open for anyone to make a run. And Anderson might not even be the champ by then, you know what I’m saying? The middleweight belt is the only one that has been held onto as long as it has. Every other belt has switched hands quite a bit.

PRO MMA NOW: Thanks for speaking with us Ed. We definitely look forward to you getting back in there. Is there anyone you would like to thank before we let you go?

ED HERMAN: Yeah, let’s see here, everybody that’s been supporting the gym for sure, everybody supporting Trials MMA (www.TrialsMMA.com), RevGear. I gotta thank Ryan Schultz. He’s making his comeback this year, you better believe that. And thanks to all the fans for sticking with me and backing me up through all this B.S. I’ll be back entertaining and kicking people’s asses here real soon.