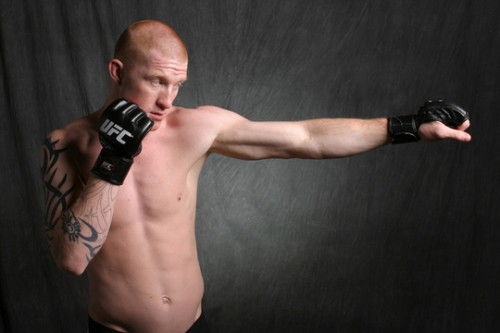 Middleweights Ed Herman and Tim Credeur are headed towards a fight at finale card for 13th season of “The Ultimate Fighter.” The event is expected to take place on June 4 at the Palms Casino Resort in Las Vegas.

Heavy first reported the bout on Saturday citing sources close to the bout.

Herman was a finalist from the third season of the reality show. On the finale card, he lost a close decision to Kendall Grove, and he has been fighting in the UFC ever since. In 2007, he went 3-0 and picked up finishing bonuses for submitting Scott Smith and knocking out Joe Doerksen.

Since the, the former Team Quest fighter is 1-3 in the promotion with a win coming over new Tachi Palace Fights champion David Loiseau. In his last fight, Aaron Simpson won by TKO after Herman suffered a devastating leg injury.

Credeur is also a veteran of “The Ultimate Fighter.” He competed on the seventh season. After the show, “Crazy” made his MMA debut against cast mate Cale Yarbrough and won with a first-round knockout. Credeur won his next two fights over Nate Loughran and Nick Catone, before dropping his first fight in the UFC to Nate Quarry at UFC Fight Night 19.

The veteran has been scheduled to fight twice since then. He was forced to pull out of UFC Fight Night 20 and UFC 113 with injuries.

The promotion has not officially announced the setting for the finale card. In the main event, WEC lightweight champion Anthony Pettis is expected to make his UFC debut against Clay Guida.