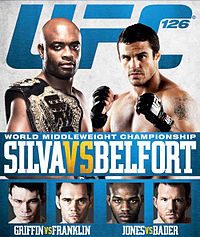 UFC 126: Silva vs. Belfort has come and gone, so now it’s time to take a look at the five biggest story-lines coming out of the event.

However, I think there’s one obstacle that he must overcome for that to be undisputed.  Check back for that one as I’ll delve deep into the arguments for and against the statement.

–Jon Jones is the real deal as a light heavyweight.  He simply outclassed Ryan Bader in all aspects.  Actually, that fight brought another question to mind.  Was Ryan Bader simply over-hyped?

We’ll delve into that discussion this week as well.  However, Jones is on an absolute tear and one wonders how he’ll handle facing an opponent the caliber of Shogun Rua.

Rua will be by far the most dangerous opponent that Jones has faced in his short MMA career.  We’ll be speaking on that aspect, and if that flight’s too early for Jones at the moment.

–Forrest Griffin beat Rich Franklin, but neither fighter really lost or gained much ground in my opinion.  The fight went just as you thought it would, except for Griffin smothering Franklin on the ground the entire first round.

I think Franklin fought well enough that he will not become the perennial gatekeeper for the division.  He’ll beat the guys he should beat, but will not be able to compete with the elite light heavyweights.

It was Griffin’s first win in over a year, so it’s time to get him back in the mix with the top dogs in the division.  I’d like to see him take on the winner of Nogueira/ Ortiz.

He was supposed to right Nogueira originally a while back, but had to pull out due to injury.  A fight with Ortiz would complete the trilogy between the two, with both fighters having a win a piece.

–Chad Mendes is becoming a well rounded fighter.  I was most impressed with his striking against a tough fighter in Omigawa.  He shot for the take-downs when he needed to, but certainly indicated that he could strike as well.

That was a great win for the young fighter, and he’ll be a handful for anyone as he continues to mature as a mixed martial artist.

–Kid Yamamoto could be done, meaning his best days are far far behind him.  I was unable to watch his fight against Demetrious Johnson on Facebook, but from all accounts he was simply outclassed.

No fighter can win against good competition consistently by trying to land the one big shot.  His loss also continues the Japanese woes in the Octagon with Yushin Okami being the only one experiencing any real measure of success.

–Demetrious Johnson was very impressive in his win.  I said in our ProMMAnow.com UFC 126 staff picks that I wouldn’t be surprised to see him best Yamamoto.  Great win.

What did you take from UFC 126?  Also, be sure to check back as we discuss the legacy of Anderson Silva, and the title aspirations of Jon Jones vs. Shogun Rua.

5 thoughts on “Five things we learned from UFC 126”