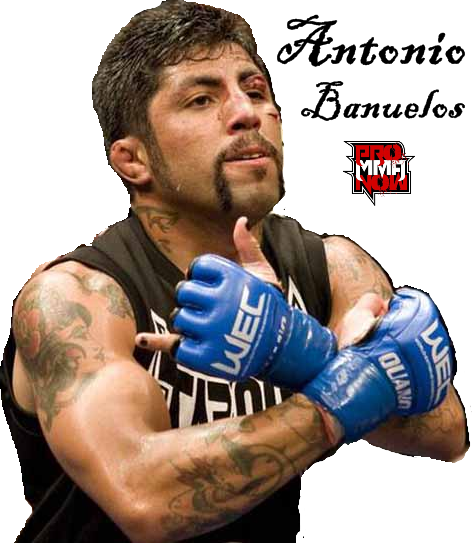 Until now, it has been something former WEC bantamweight Antonio Banuelos (18-6) could only imagine, but this Saturday night at UFC 126, his dream finally becomes a reality.

After nearly a decade as a professional MMA fighter, 31-year-old Antonio Banuelos will officially be a UFC fighter.

“Fighting for the UFC is like a dream come true,” Banuelos told ProMMAnow.com (www.prommanow.com) in an exclusive interview on Thursday. “I won’t be nervous, but I’m super excited, and can’t wait for this fight.”

Banuelos won’t have too much time to celebrate once he steps into the cage though, as former WEC Bantamweight Champion Miguel Torres (38-3) has been chosen to be his welcoming party into the organization.

It won’t be a fight that Banuelos isn’t prepared for, as he has been training constantly for his big debut since he found out about this fight in November.

“My training camp was at The Pit in Arroyo Grande, [CA] with John Hackleman and Chuck Liddell. Some of the people who helped me out for this fight [were] Cruz Gomex, Luke Riddering, Mike “The 1 I Like” Gahan, Greg “Lil Bulldog” Bake, [and] Adrian Iriate. I also [went] to SLO Kickboxing and trained with Justin Fraiser. I did my strength and condition over at Athlon Elite.”

With his training camp behind him, Banuelos feels that he is ready to control the fight on Saturday.

“I want to push the pace during the fight,” Banuelos said. “And punch him more times than he punches me.”

But if the fight goes to the ground, a place where Torres has had the most success, Banuelos isn’t worried either.

“I’ll be comfortable wherever the fight goes,” Banuelos said. “I’m more focused on working my game plan. That’s what matters to me.”

Since the merger of the UFC and the WEC was first announced in October 2010, there has been a lot of talk about there being more pressure for fighters to win since it might be easier to get cut with the large influx of fighters coming into the organization. Banuelos though is motivated more by the idea of becoming champion, than he is by the thought of getting cut.

“Yeah I have to work harder,” Banuelos said. “But it’s mostly because my weight class is so stacked with competition. I’m more worried about getting the belt and being number one.”

So how does he envision the realization of his dream playing out at the conclusion of his fight Saturday night?

“I see it ending with my arm raised,” Banuelos said. “I’ll take a KO, submission, or decision. It doesn’t matter to me.”

One thought on “UFC debut is a dream come true for Antonio Banuelos – ProMMAnow.com exclusive”