Overeem vs. Duffee likely for Dynamite!! 2010 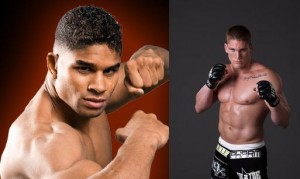 After all of yesterday’s speculation, reports by MMAJunkie and MMAFighting indicate that a New Year’s Eve match-up between K-1 and Strikeforce champ Alistair Overeem and former UFC prospect Todd Duffee is just about a done deal, with both sides agreeing to the bout.

Duffee recorded the fastest KO in UFC history, stopping Tim Hague is just seven seconds. However, after dominating a seemingly over-matched Mike Russow on the feet for two-plus rounds at UFC 114, Russow scored a come-from-behind knockout out of nowhere with an overhand right that caught Duffee flush.

In his first fight since his UFC release, Duffee now faces one of the best and most feared strikers in mixed martial arts. Having watched Overeem make his way through the K-1 World Grand Prix only a few weeks ago, it’s hard to see him losing a striking battle to Duffee.

Still, all of Duffee’s wins have come via KO or TKO, and the Russow collapse aside, Duffee is one of the few fighters that could potentially match-up with Overeem’s size and athleticism. And it’s not like Overeem hasn’t been knocked out before by a heavy-handed opponent. However, Overeem hasn’t been stopped in MMA since 2007 and he has several years and dozens of fights in additional experience over Duffee.