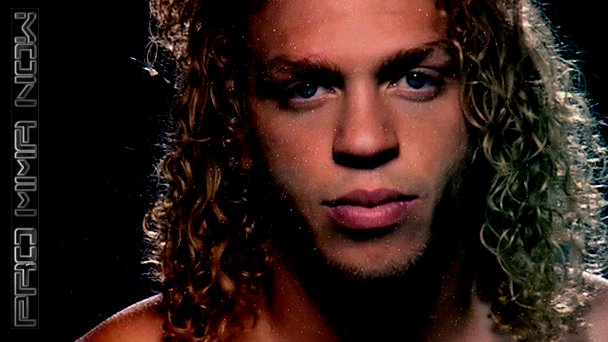 It is time once again for the close of yet another installment of The Ultimate Fighter, as the last two men standing tonight will move on to face one another at the TUF 12 finale. Tonight’s two hour episode will feature the semi-final bouts between Kyle Watson and Jonathan Brookins, while Nam Phan will face off against Michael Johnson.

With Brookins and Watson facing off and being from the same team, coach GSP counsels his two fighters for the last time as the coach of Team GSP. He stresses to them that there is no more team, and that it is finally time to be “selfish”.

The yellow team finds themselves fighting boredom more than they do actually fighting. As training winds down, the fighters combat the boredom by venting to each other about the quirkiness of their coach Josh Koscheck.

Marc Stevens shows off his best Koscheck impression, and just as he gets really into it, Koscheck walks into the house and cuts the fun off at the root.

Koscheck believes that the backlash from his own guys comes from the fact that most of them lost in the competition, and that they refuse to accept responsibility themselves for losing, instead blaming their coaches for their lackluster showings.

Jonathan Brookins misses out on all of the excitement, deciding instead to opt for some alone time in a far away corner of the yard at the house, contemplating on his time on the show.

“I’m definitely not one of those dudes that likes to be in the middle of a big crowd,” said Brookins. “I find myself just spending a lot of time, as much time as I can, by myself.”

“I didn’t disrespect my time here. That’s one thing that I really wanted to get out of this. I wanted to make sure that I was at every training session, and train hard every session, no matter what.”

The second semi-final bout will be between Nam Phan and Michael Johnson, and Phan is wasting little time trying to get information from Team GSP on his upcoming opponent. Phan’s “shadiness” as his teammates call it, comes from him spending extra time with Team GSP instead of his own team.

It is time for the weigh-ins for the Brookins/Watson bout, and despite the glorious mustache, Watson still weighs in at a svelte 155 as does Brookins.

Round 1 – The fight starts with a quick exchange, then Watson scores with a leg kick. Brookins comes back with a nice jab. Watson resets and scores with a jab of his own.

They clinch, and Watson lands a nice knee and follows up with a nice right hand. Brookins shoots for a single and the fight is now on the ground.

Watson is trying to use the cage to stand and does. Brookins stays on him, pressing him against the cage and fires off a knee. Brookins drops and snatches up a leg, but Watson is free and circles out to the center of the cage.

Nice jab from Brookins, and Watson counters with a short uppercut. Brookins changes levels and gets yet another take down. Watson is using a little butterfly guard, but Brookins steps over into his half guard. Watson has his back against the cage, and isn’t doing much from the bottom.

Not much action right now as Watson is trying to create some space with Brookins looking to maintain top control. Watson leans forward and Brookins goes for his back forcing him to sit back. Brookins is now in the full guard of Watson.

Brookins postures, stands and drops some heavy shots from the top forcing Watson to roll for the moment. End of Round 1. ProMMAnow.com scores Round 1 for Brookins, 10-9.

Round 2 – Good head movement from Watson, but Brookins fires a jab, then shoots and secures the take down. Brookins is low in the full guard of Watson, but postures enough to fire off a big right hand. Brookins scores with another right hand from the top as Watson fights for wrist control from the bottom.

Watson starts to rotate for an arm bar attempt but Brookins instantly recognizes it and posture sup. More punishment from Brookins from the top.

Watson kicks off and tries to get to his feet, but Brookins is immediately right back on him and has his back now. Watson is leaning against the cage defending from Brookins getting any hooks in from the back.

Brookins is showing a lot of patience and is now landing big elbows. Watson is flat on his back with Brookins standing over him landing big shots. He HAS to get off of his back. He fails to do so, but does land a single elbow from the bottom.

Watson tries to kick Brookins off again but cannot. Brookins spins trying to get to side control with only 30 seconds to go, and the round is over. ProMMAnow.com scores Round 2 for Brookins, 10-9.

Round 3 – Watson closes the distance early and clinches landing some nice knees. Brookins turns him into the cage and is looking to change levels once again. Very nice knee from Watson as they separate.

Leg kick by Brookins, then he drives for another take down and gets it against the cage. Watson’s only chance is to finish Brookins if he wants to win. Watson is breathing heavily as he tries to use the cage to stand.

Watson makes his way to his feet but Brookins still has a hold of his leg looking to take the fight right back to the mat. Watson scores with a few right hands, but Brookins gets yet another take down with only 2 minutes to go.

Right hand from Brookins lands as he postures. Watson is on his back still with only a minute to go. Brookins lands a big elbow from the top. Watson’s corner is screaming for him to stand up but it doesn’t look like it’s going to happen.

Brookins alternates with shots to the body and head with :20 seconds to go. Watson turns and Brookins is trying to take his back as the bell sounds. Another round for Brookins. ProMMAnow.com scores the Round 10-9 for Brookins, and the fight overall for Jonathan Brookins, 30-27.

Aaron Wilkinson tells the rest of the guys that Nam Phan takes over an hour in the shower, implying that some brutal type of spanking is probably going on along with the hair washing and other showerly deeds.

A few of the fighters decide to get proof of whether any “wackiness” is going on, by sneaking into the bathroom while Phan is showering.

It’s training time for Michael Johnson, as he prepares for his fight with Team Koscheck member Nam Phan. Despite Phan’s MMA experience advantage, Johnson is less than impressed.

“I’m fighting Nam Phan, and you know, I’ve watched him fight, and to me, he’s the same old fighter,” said Johnson. “I didn’t really see Nam get any better as this competition went on.”

The jokes keep coming at Phan about the shower incident, but he is obviously still very focused on his fight.

“Michael Johnson has the most holes in his game,” said Phan. “I think I’m a more typical striker than he is, I have more boxing.”

“He’s more of a… I guess, street-ghetto-brawler. I don’t think he knows what he’s doing, he just throws punches to get the take down.”

Round 1 – Johnson jabs, Phan kicks. Phan kicks again, and Johnson immediately puts him on his back. Phan is back up, but is put right back down on the mat.

Phan grabs an arm, and Johnson steps away, and Phan is on his feet again. It doesn’t look like Johnson wants any of Phan’s jiu jitsu. Johnson lands a kick, but Phan catches it and lands a nice right hand, and Johnson goes down, but it is more of a slip than anything. Back to the feet.

Phan lands another right hand, and gets taken down but bounces right back up. Phan is still kicking and Johnson counters with a big right hand. Phan’s corner is calling for more punches and less kicks.

Johnson shoots and gets another take down but will he be able to control Phan? The answer is no, as Phan scrambles back to his feet easily.

Big exchange, and Phan lands a nice body shot. Johnson shoots, doesn’t get the take down, but lands a huge left hand that backs up Nam. Johnson is really loading up his punches now. Johnson shoots again but Nam defends nicely, steps away, and circles out. Very action packed opening round.

Johnson lands a big knee in the clinch, then throws a 4 punch combo, and Nam is bleeding. Johnson is relentless in his attack. Phan pushes off and lands a nice head kick with just over a minute to go.

Another head kick by Phan is blocked by Johnson. Phan’s strategy of being in better shape might pay off as Johnson is slowing down. Just as I say that, Johnson comes forward with a barrage, snapping the head of Phan backwards. End of Round 1. ProMMAnow.com scores the first round for Michael Johnson, 10-9.

To the center of the cage now. Phan is letting his hands go now. Johnson shoots and drives Phan into and off the cage and ends up on his back, but only for a moment.

Back to the stand up battle. Kick by Phan, and now Phan is putting together combos as Johnson is slowing down. Johnson just misses with a big uppercut, and Phan comes forward with another left to the body. Head kick by Phan is blocked and Johnson is retreating now.

Jab by Nam, then to the body as Johnson looks to clinch and get Phan to the mat. Johnson is leaning on him against the cage, but Phan easily circles out and away and takes the center of the cage.

Phan to the head with the kick, and Johnson comes back with a nice left hook with 30 seconds to go. The round ends with a clinch against the cage. Round 2 was much closer, and goes to Nam Phan, 10-9.

Round 3 – A kick to start from Phan. Johnson scores with a right hand, then shoots. Phan jumps guard and goes for an arm but is now on his back. Phan is VERY active from his back. Johnson is not doing anything other than trying to control Phan.

Phan is warned for hitting the back of the head from the bottom. Phan hip escapes and is out and on his feet. Johnson clinches and is pressing Phan into the cage, but cannot keep him there.

Big exchange from both guys but Phan gets the better of the strikes. They take the center of the Octagon and Phan goes to the body again with a big shot. Johnson is still pressing the action looking for the take down against the cage.

Johnson locks his hands and goes for the high crotch, then gets a single leg take down. Phan is easily back to his feet. Nice right hand from Johnson. Phan counters with a kick.

Big uppercut for Johnson, then he changes levels and works for another take down. Under a minute to go and they disengage again. Johnson is coming forward and giving it all he has with a flurry of punches and a nice knee.

Both guys look exhausted now with under 20 seconds to go. Johnson lands a kick, and Phan lands a big right hand to the body. Close round. ProMMAnow.com scores the final round for Michael Johnson, 10-9, and the fight overall to Johnson 29-28.

The TUF 12 finale will feature Jonathan Brookins vs. Michael Johnson this Saturday evening, and that fight should be an absolute war!